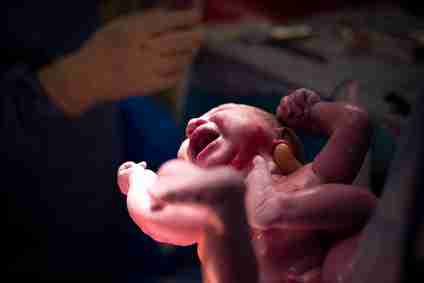 When I go in to deliver Baby 13 it will be my sixth caesarean section.  Opting for a caesarean was never something I would have ever voluntarily done.  I much preferred – prefer – a normal labour to the sun-roof eviction of my baby and this was how my babies had always been delivered.  Always, that is, until the labour of my seventh child.

Labour was progressing as it always had.  I was sucking for dear life on the gas and air, occasionally gnawing away on the mouthpiece for any relief that action might possibly give.  My waters had broken and the monitor was beeping away until the beeping from baby’s heart was no longer as frequent as it should have been.  It was less than fifteen minutes between the time when the midwife explained to me that the baby’s heartbeat was dangerously low and there was no time to waste.  I needed an emergency caesarean and I needed it right now.

Dozy and indolent one moment, then writhing in pain the next, I had to force myself to concentrate on what I was being told.  The consent form was held up in front of me but I could barely hold the pen to sign.  The dash along the page had to do.  The baby’s heartbeat was now dangerously, dangerously low.

The next part went by in a haze, I don’t know if I remember the journey into theatre, but I do remember feeling torn.  ‘I don’t want to do this!’ I cried, which was shortly followed by a begging ‘Save my baby!  Please!’

The rush to prep me was obvious and I remember being reassured at every step.  I felt strange as a screen went up across my chest and as the pushing, pulling and rummaging around went on in my belly.  I was feeling woozy and detached until suddenly a scrawny little thing was held up over the screen – a little like the scene from the Lion King only with a less majestic sparrow-like pink baby screaming his contempt at the sudden evacuation he was forced to undertake.  I was sore and knocked for six, but our baby was safe and that, I told myself, was the main thing.

When I fell pregnant again I knew I didn’t want to opt for a c-section so a VBAC was agreed.  Once again, however, things didn’t go to plan and Oliver’s heart rate started dipping.  It then continued to dip until persevering was no longer an option.  It was another rush into theatre for a second caesarean.  The age gap between Patrick and Oliver was 23 months.

When I fell pregnant with our next child I was told immediately that after two caesareans the hospital strongly recommended c-sections thereon in.  The recommendation was so strong in fact, that it didn’t seem to offer an alternative.  And so that is what I reluctantly resigned myself to.  15 months after Oliver was born, Joseph was delivered by c-section number three.

I remember being discharged two days after Joseph’s delivery.  I said my usual leaving line of ‘See you next year!’ and the midwife within earshot looked at me with utter dismay.  ‘No!’ she told me quite firmly.  ‘You can not have any more children after three sections.’  She knew nothing about me or my history yet spoke with certain authority.

After that came two more pregnancies – the twins in 2011 (an age gap of 13 months between them and the previous pregnancy), and Isobel 13 months after that in 2012- and delivery by (televised) c-section for each of them.  The number of people who have since searched and found this site with the terms ‘how many c-sections has Tania Sullivan had?’ is remarkable, and the number of people who have contacted me to ask how many sections a woman can safely have is just as amazing.  After all, I am no authority but I am, I suppose, a little unusual.

It is because I am no authority that I am going to give an answer which will certainly disappoint.  If you are looking to me to say, ‘It’s fine!  Have a third/fourth/fifth – I did and I’m fine!’ then I’m sorry, I can’t.  I am not a medic, and more to the point I am not your medic.  I do not know your history and I do not know your story.  My answer to whether you should have another pregnancy/c-section is ‘Ask the right person.’

Many people have expressed concern regarding my repeated sections.  However, be reassured that I do have post-op appointments with my consultant.  This is the same consultant who has looked after me since my pregnancy with my fourth child, and who has personally carried out the c-sections for my last two pregnancies.  She literally does know me and my obstetric history inside-out and I trust her implicitly.  If there were any life-threatening or even seriously disabling risk to me or any future baby she would tell me without hesitation.  She is scrupulously honest as to any risks I have which of course are greater now than they were with a first section; for example, there is an increase in the possibility of nicking into my bladder, and there is also the obvious case of more scar tissue to cut through.  I have been extremely fortunate in that I have never had any serious problems or issues in any pregnancy, delivery or recovery.   Yet we both know that each time a baby is handed to me could well be the last time before I hear the words, ‘no more now.’

Most hospitals state that three caesareans are the maximum they would recommend but, as my consultant explained, it is not due to an increase in risks but because a majority of women do not have more than three c-sections at the very most.  Therefore, there is not enough evidence or knowledge to provide enough information on higher numbers of repeated sections.  This is where my personal experience and hospital notes come in very handy for training students, as we can provide another side of obstetric matters not often seen.

If you have any questions or concerns please do make an appointment with your own obstetric consultant in order to talk them out directly.  One worth their weight in gold will not scaremonger but will voice any concerns they may have, will provide you with the full facts and will, once they have armed you with all relevant information which applies to you and your situation directly, will respect your intelligence enough to leave any final decision to you.

26 thoughts on “How many c-sections can a woman have?”