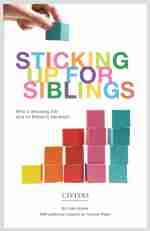 Large families would be forgiven for thinking that they are under attack at times.  The stories that do the media rounds are often not very positive; stereotypical opinions are tossed around with abandon and then there are all those articles.  You know, the ones where some financial institution’s PR fires off a press release stating how many hundreds of thousands each child costs, giving rise to the: ‘So how you do afford it anyway?’ questions that people ask with half-closed eyes and a quizzical sideways slant of the head.  Remember my large family debate on This Morning last week?

Not to mention questioning our sanity.  Oh yes, we must be crazy, mustn’t we?  Crazy-mad freaks to want all those kids that cost all that money!  Why do that to yourselves?!

Fear not, for Colin Brazier is on the case!  The father-of-six (and Sky News presenter), along with Swedish researcher Therese Wallin, attempt some much-needed large family rehabilitation; that is to say, they’re rehabilitating the opinions and speculation surrounding large families, rather than providing group therapy sessions for the obviously deranged parents who choose to have them.

With the rise of only-children and siblings becoming increasingly scarce, the new book Sticking Up for Siblings: Who’s Deciding the Size of Britain’s Families?

, released by Civitas today, explores an array of theories and research into sibship.  In an attempt to rebuff the exaggerated cost warnings of the decision to expand families by pointing out the true costs of having a second (or third, or more) child, it also appeals for parents to instead consider the vast benefits and advantages that siblings bring.

Whilst I’m certain that this book wasn’t intended to be a rebuttal for Lauren Sandler’s book One and Only: The Freedom of Having an Only Child and the Joy of Being One, it certainly has proven to be one, and very thoroughly so.  I recalled making several arguments against Lauren’s research which ‘proved’ how only children were ‘better’.  Colin, whilst keen to convey the benefits of siblings, does so without the intent of disparaging onlies, and this, for a start, appeals to me far more than Lauren’s more forceful attitude.  That Colin’s findings backed up much of what I and plenty of large families believe is both reassuring and  encouraging, so to see someone making such a great case in our favour is not only much-appreciated, but much-needed also.

Colin writes not only as a researcher into the effects and benefits of siblings, but from first-hand experience as a father too.  As I read my way through the book, I noticed just how many of the examples and scenarios of his own family life to which he referred were also occuring in our own home.

Pedagogy of course, made its mark fairly early on in the book.  We all have experience of seeing how much quicker the younger children learn simply by following the lead of their older siblings.  This was brought home to me further when Caitlin returned from her Irish dancing lesson and eagerly ushered the twins into the garden.  Five minutes later all three were happily ‘kicking’ away, rosy-cheeked and laughing, and for me it was priceless to see.

Colin also states that levels of obesity in children with siblings tends to be lesser than those without, partly due to smaller meal portions and greater calorific expenditure.  This wasn’t something I had ever given much thought to until asked about it during an interview, where it suddenly dawned on me that the instant teams, the challenges and competitions regularly set between them often results in several children running and charging herd-like in order to be crowned winner.  Yes, I could see how siblings naturally bring about more opportunities for physical exertion, and subsequently greater, more frequent bouts of kinetic energy.

Research has also shown benefits in a reduction of mental health problems which might be brought on by family crises such as marital breakdown or parental death, due to the readily available and established natural support network that siblings have.  Health-wise, they are also found to be less susceptible to allergic conditions and illnesses thanks to the free sharing of infections passed onto each other from a young age.  Not so reassuring when, as a parent of a large family, you’re stuck in the midst of a norovirus outbreak.

Not only does Colin draw on the benefits that the research has uncovered, but he also questions the value of children within society.  He questions that if by not having more children, will there eventually be a high cost to parents, society and children themselves by depriving them of the advantages that having siblings brings?

Whilst not a long, drawn-out book of facts and figures, the combination of research along with Colin’s personal observations into raising a large family makes this a very interesting and informative read.  Parents of several children will find themselves nodding in agreement, perhaps identifying key behaviour that, like me, you simply take for granted and don’t normally give a second thought to.

For those sitting on the fence about whether to expand your family or not, this would be highly recommended reading to provide an inspiring yet gentle insight you may not otherwise have.  Humourous at times, yet inciteful and informative always, Colin presents a strong case for siblings in an affable and reasoned manner.

Sticking Up for Siblings: Who’s Deciding the Size of Britain’s Families?

(rrp. £8.00) is available from all good sellers including Amazon from today.

2 thoughts on “Sticking Up For Siblings: Who’s Deciding the Size of Britain’s Families?”