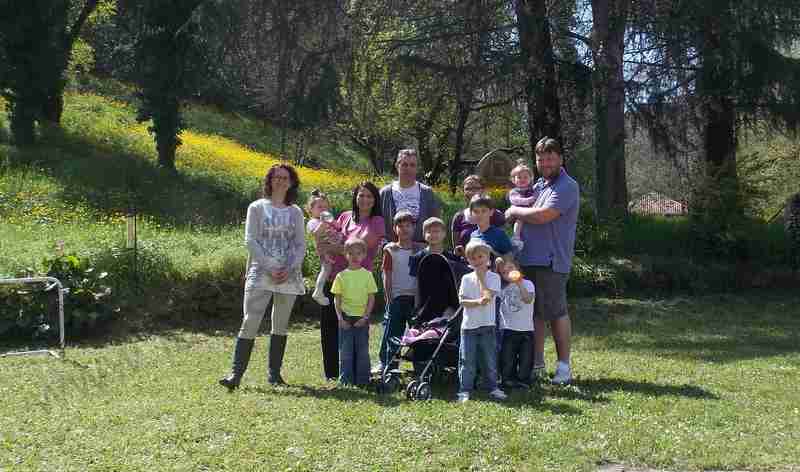 Our grand entry into Italy might not have been quite how we expected it to turn out.  Certainly, when the the realisation kicked in that that we were stuck with a minibus load of children, with limited phone reception to try and get the help we needed and nobody around for miles we had a million and one things running through our minds.  These mainly consisted of mental plans on making our food and water supplies last and hoping we would be able to keep everyone warm as the day grew to a close.

When our rescuers arrived it was all we could do not to hug them whilst thanking them profusely.  The policeman who arrived with the recovery team asked us where we were headed and, when we told him he replied wryly: ‘This is not the best way!’

Yep!  We agreed there!

The following day was spent answering journalists various questions as they contacted us for our story.  When the rescuing  Carabinieri arrived with Italy’s TV crew for their news channel, we did hug them and thanked them profusely once again, and the one who had came to our aid on the mountain asked how long we would be in the area for as he wanted us to meet with him and his wife.

We exchanged contact details and promised we would see each other before we left.  Unfortunately, we ended up leaving the first property within 48 hours of arriving – but that’s a whole other story which I’ll cover at a later date!

We stopped by the Carabinieri on our way out of the area but Thomas was not at work, so we text him a message explaining what had happened. We would be at another place a three hour drive away, we told him.  If he and his wife wanted to meet up we would still love to do so.

They visited the following morning!

Thomas and his gorgeous wife Rita drove a six mile round trip to spend a few hours with our family!  What a very wonderful couple they are – so kind, so generous and so very, very lovely.

Mike and I regretted never having even learnt the basics in Italian, so conversing with Rita was quite difficult.  Thomas had an excellent English vocabulary and so made a good translator between us!

We ate lunch together and got to know our new friends better.  Google proved to be an incredibly useful translation tool!

And Rita had brought us this delicious cake that she had baked.  Oh, it was divine!

After a few hours it was time to say goodbye, although hopefully not for long.  We hope that they will visit us in England, and we already have plans to return to Italy – hopefully with a better grasp of the language too!

It goes to show that sometimes those serendipitous moments that occur are just meant to be, even if they don’t seem so great at the time!