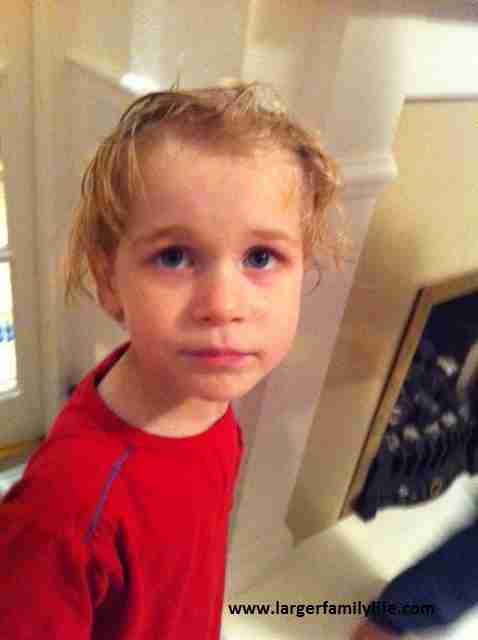 As we approached dinner time we realised that Paddy (5), Oliver (3) and Joseph (2) hadn’t been seen for a while.  As we know from experience, this could not be a good sign.

We called them down and down they came.

‘Oliver, what have you done to your hair?’

‘Oliver, what have you put on your head?’

Because I’m nothing if not perseverant I try again.

‘Bubbles!  I put bubbles in my hair!’

I, not so happily, take his hand and follow his lead.

A previously full bottle of kid’s body wash sits in the sink.

‘Those bubbles, see?!’ he tells me cheerily.

‘Is that all you put in your hair?’ I asked him.  I wasn’t quite sure I wanted to hear the answer.

‘Well, what else did you put in your hair?  More bubbles?’

I still wasn’t convinced that I would want to hear his reply.

His smile broadened and his eyes widened enthusiastically as he spoke.

Yep.  My hunch was right.  I didn’t want to hear his answer.

‘Oh, not paint,’ he told me, furrowing his brow thoughtfully.

‘Well, that’s good!’ I said, feeling the relief seeping in.

‘Papier Mache!’ he announced as he remembered what it was called whilst Paddy simultaneously walked in with a tub of the stuff.  It turned out Eddie had taken a supply up for safe-keeping after a recent project.  Clearly, we ought to have specified that neither paint nor papier mache were allowed beyond the boundaries of the kitchen.

Still, it was too late for that.