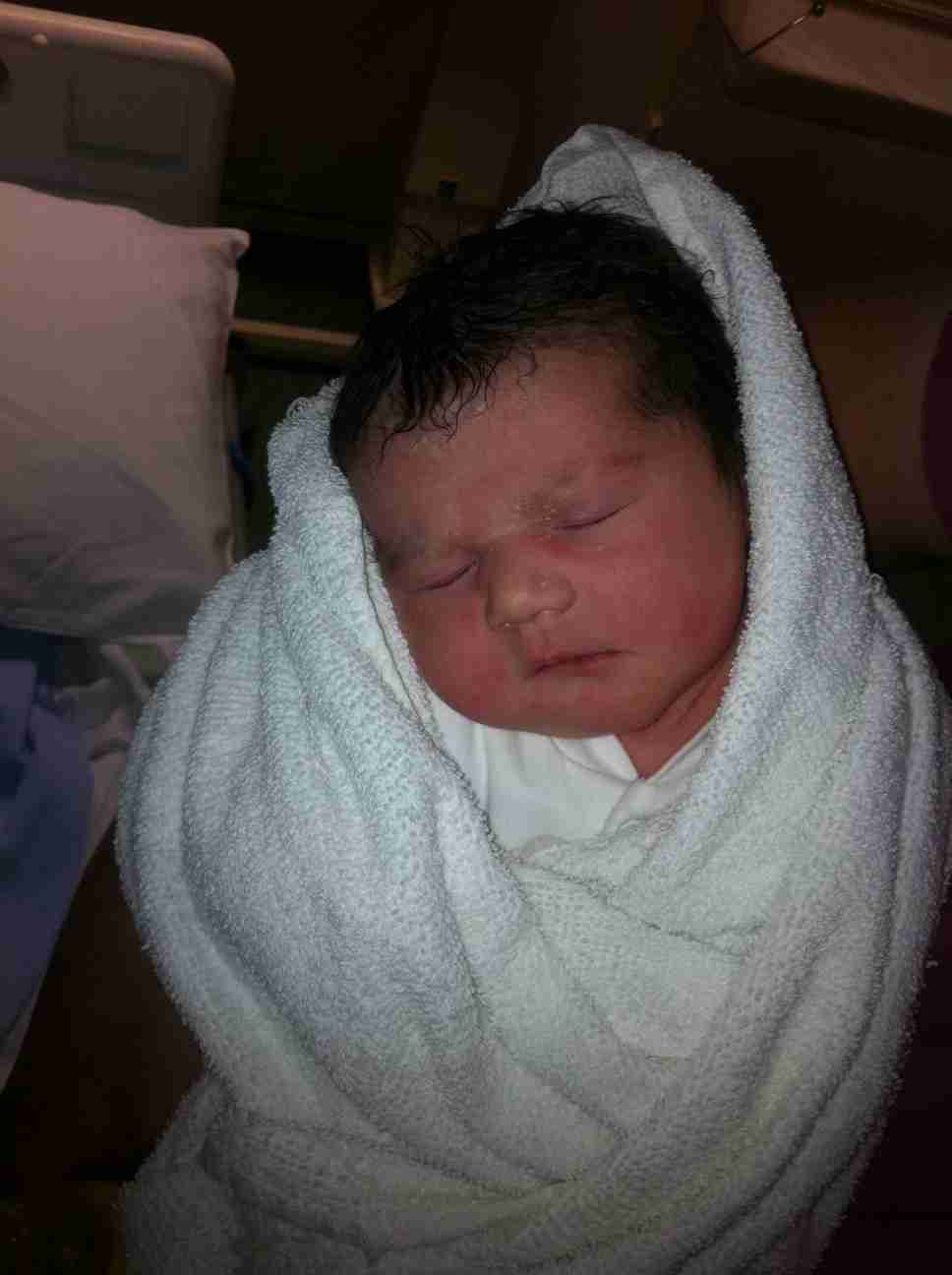 Well, here she is!

Last Monday I posted what I thought would be our last pregnancy diary update until Baby 12’s scheduled delivery on the Thursday.  I mentioned that I had been getting twinges at intervals but still wasn’t thinking very much of them.  I pleaded with the threat-of-labour to allow me the time to visit my accountant as arranged on Monday morning.  My permission was given for labour to kick in during the afternoon.

By Tuesday morning I had updated Baby 12’s pregnancy diary again to give an update on the previous night’s lack of sleep.  Still unconvinced that anything was getting underway, I was still very aware that I needed to be cautious just in case labour was attempting to get fully started.  This was something we did not want to happen.  A short while after posting that update I called the labour ward’s triage department and explained the situation.  As we expected might happen we were asked to go in to be monitored.

On triage I was internally checked via speculum which confirmed that I was not yet dilating at all.  This was good as it gave us plenty of time to be monitored and see what was going on.  A short while on the CTG and it confirmed that tightenings were occurring although not with any real regularity or strength.  It was decided that not only would I not be going home that day, but that our scheduled caesarean would be brought forward to the following day.

I woke up with a mixture of feelings.  I was hoping that I wouldn’t be taken down to theatre too late in the day, knowing I would only make myself more anxious the longer it dragged on for.  I was excited and apprehensive all rolled into one, but mostly I just wanted it to be over and to be holding my baby safely in my arms.

I have to admit that mixed in with the usual and expected feelings, there was a big part of the nerd in me which was ecstatically, inexcusably happy that this baby would have the wonderfully palindromic birthday of 211112!  I shan’t apologise for the geekiness.

Mike was certain that it was a girl.

One of us was right.

Shortly after midday we were ready to go.  The moment had arrived and we went down to theatre.  Mike, armed with the production company’s flip-cam, set himself up to film the birth as the hospital still were not happy to have the crew there.

At 13.47 and after what seemed like an age the baby was delivered.

‘Can you see what it is?’ the consultant asked him as she held the baby on the other side of the screen.

Mike, who had been busy filming away was struggling to view the baby through the lens before realising seconds later that he could look past the camera for a better view.

‘Yeah, yeah I see what it is!’ he said and I thought his reaction just had to mean that the baby was a boy.

As they brought the baby around to my right side for me to see for myself I couldn’t believe it!  She was clearly, quite clearly not a boy!

‘I was certain!’ I cried out disbelievingly yet delightedly.

My baby was safely here and she was a beautiful, perfect little girl.

We marvelled at how much she looked like Libby.  We looked over every part of her, finding similarities between her and her siblings and we were amazed at her shockingly full dark head of hair.

She was absolutely, perfectly and completely adorable.

And now, five days on, I can confirm that she still is.

I told you she is  absolutely, perfectly and completely adorable.

Thank you to everyone who has sent messages, thoughts, prayers and good wishes to us both throughout the pregnancy and in the last week.  We very much appreciate every one of them.