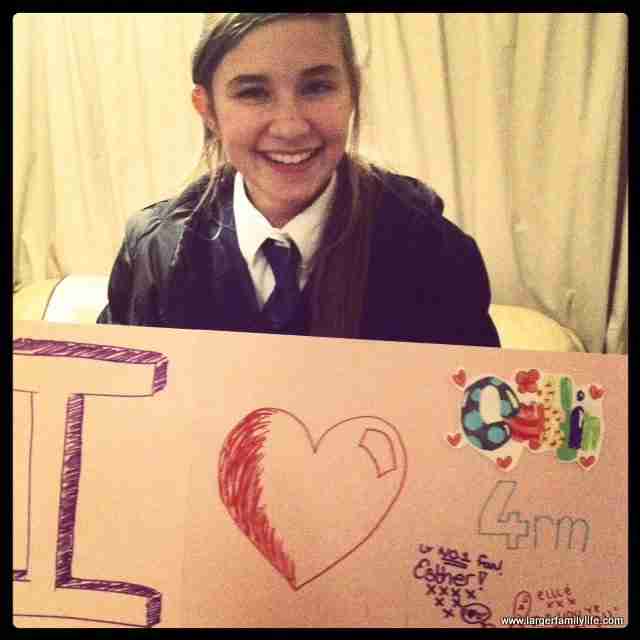 Last night Caitlin returned home from a club happy and smiley-faced.  Her friends (yes, she had been out of the house and mixing with other children!) had given her a card for giving such great interviews on the programme 15 Kids and Counting.  It made her happy – see her face?!

There has been a lot of criticism out there regarding our homeschooling, with shouts of “Get them into school!” and, “You can’t teach children of different ages” and even going so far as to call me a rubbish teacher as one newspaper critic did.

I laughed at them all.

The programme didn’t have enough time to explain how homeschooling in our home works.  It probably doesn’t  work like it does with other homeschoolers (or home-educators, as many prefer to be known).  There was only so much the show could cover but I’ve provided the links to why and how we homeschool in the post Glad it’s over – The truth about 15 Kids and Counting (and it wasn’t to keep them away from the outside world and negative influences as the show was edited to portray).

Why did it make me laugh?  Because all the time complete strangers were commenting on how my children, and Caitlin in particular couldn’t be learning anything, that I wasn’t teaching well or  that I was too stupid to teach she was demonstrating otherwise.

All the time people were saying how my children will never know how to mix with other people or learn “the proper things” and yet they couldn’t see that they were making these assumptions while they were watching her being interviewed and what they were saying wasn’t what they were seeing.  Caitlin was relaxed with the interviewer, articulate, mature, intelligent, well-spoken and confident.  Oh and by the way she isn’t 13 – she only turned 12 during filming so she was quite a bit younger than people believed.

I would confidently pit her against a 12 year old who was being educated in the local comprehensive because I know she is working to her full potential and ability which was the main reason we decided to home educate.  Some of the things she is learning other 12 year olds won’t have even covered yet.  Did she seem uneducated and a quivering, anxious wreck to you?  Point made.

Homeschooling is still relatively “different” in this country and misunderstood.  People equate homeschooling with not getting an education and not mixing with other people when nothing could be further from the truth.

It works well.  We know that it works extremely well and for the critics of it I suggest you watch my daughter once again and then tell me it doesn’t.

I have nothing to prove.  Caitlin already did that for me.

You may also be interested in reading how editing is used to tell a story that doesn’t exist:

8 thoughts on “Homeschooling and why the reactions made me laugh”