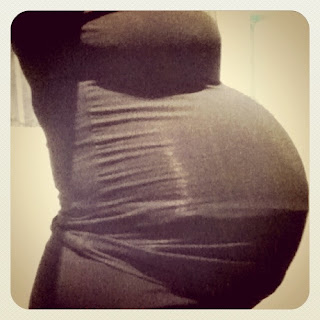 Twin Pregnancy 34 weeks
I apologise for the lateness of this week’s update.  Remember I told you about sickness in a large family?  Well, I got it.
Like it hadn’t been enough being hit with one thing after another the last few weeks, I became even more tired and lethargic than normal, or rather what has become “normal” lately, on Friday.  I slept through the weekend and Monday of this week, and the vomiting began on Saturday.  This increased the Braxton Hicks contractions leading to a very restless Sunday night, wondering whether I should call my friend on night labour standby.
The Braxton Hicks calmed down eventually, or at least enough for me to sleep.  My theory is that if I can sleep through any pains then I’m not in labour.  The following day I was still ill, still dehydrating, and again experiencing strong tightenings.  I rang the triage on the labour ward to be told I would not be seen there as I had a bug.  Fair enough, but what if labour did progress?!  I had visions of Mike having to deliver the twins in the living room.
Anyway, I’m feeling much better now and the twins are still inside.  I have really had enough now.  The twentieth seems a lifetime away even though it is now only 15 days away.  I truly feel like I am at the final hurdles and I’m finding it difficult to jump them.  My energy levels are so depleted as are my defences.  I’m hoping I don’t get hit with anything else before the babies arrive.
I know I’m supposed to say how I’m glad the babies are still inside, being cooked as they should be.
I know I’m supposed to say I’m cherishing these last few weeks and days.
I know I would feel as guilty as hell if they were to be born now and put into special care.
But I can’t help how I feel, and at the moment I feel completely and utterly fed up.  Uncomfortable, knackered and good for nothing and so, so ready for it to be all over.