For the preceding days we had been hearing about hurricane storms due to come over to batter Britain at the start of this week. Yes, the end of summer comes with a definite full stop, I thought.

When plans for Sunday afternoon were non-existent yet the sun was shining it seemed a shame to waste it. Goodness knows we’d be cooped up enough indoors over the next few months as it is so despite a weekend filled with Braxton Hicks contractions we decided to take the children fruit picking.

We searched around for local farms. Many of them offered pre-picked fruit for sale in their own little shops and the ones who did allow you to pick your own had finished at the end of August. We did find one place not too far from us which still had several different types of fruit available for picking. So we ate an early lunch and headed off.

We were the only family there that we could see.  We saw nobody else near us until it came to leaving.  This was fun as we could then pretend that we were on our own farm.  Make believe isn’t just for the kids, you know!  *Sigh*… maybe one day we’ll get that farm we’d love… 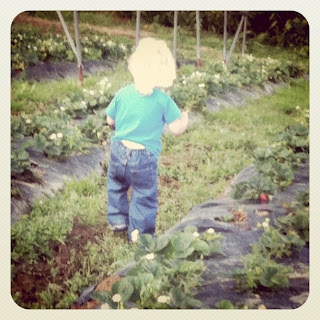 … and it wasn’t long before he had his own little punnet filled to the brim of strawberries.  The only thing was it took a little trial and error to get the hang of not tipping the punnet over every time he bent down to pick another strawberry, resulting in the lot falling out and needing to be picked up over and over again.  It didn’t faze him too much.  For every strawberry that ended up in the punnet, two or three were eaten. 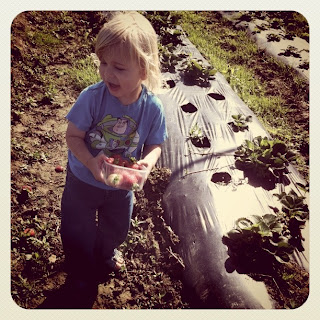 Oliver wasn’t the only one guilty of eating the produce… 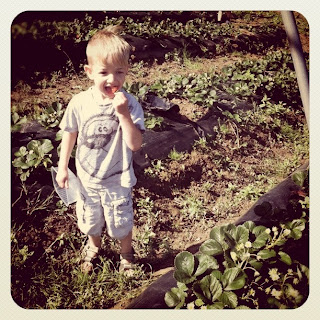 Some people say that it is no longer necessary for families to have a lot of children.  They say it was acceptable in the olden days because parents needed lots of children in order to work on the farm.  I have to say that it’s quite handy even now.  And boy, did we work them hard!  I mean, you only have to look at Caitlin wiping the sweat off her brow to see the sheer amount of child labour these poor little souls had to endure…. 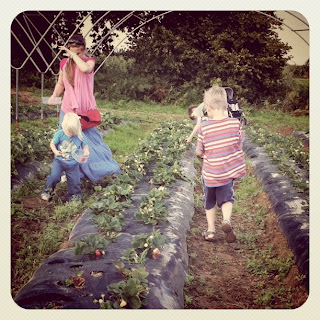 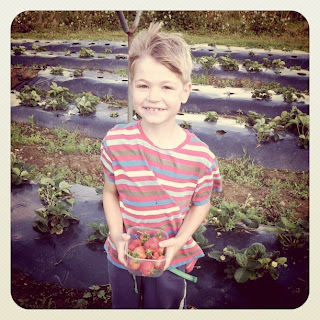 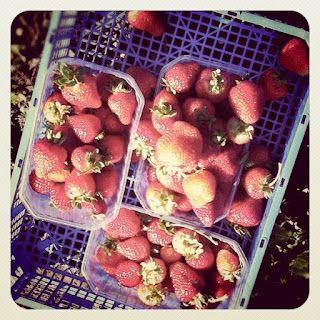 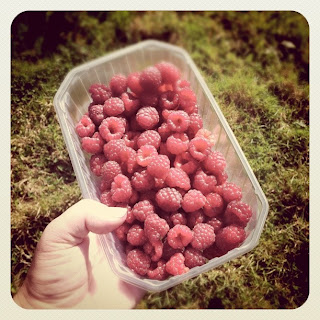 … and our final bounty resulted in two boxes like this… 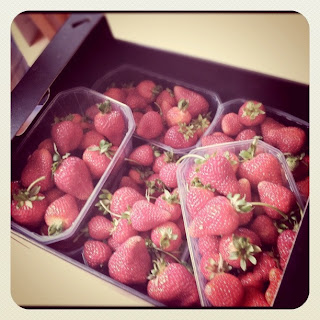 If you can squeeze the last drops of summer out and get yourself a few strawberries before autumn sets in you can make yourself some lovely, home-made jam.  Here is a quick recipe for you:
Strawberry Jam Recipe
Ingredients:
Strawberries – make a note of the weight
Sugar – equal in weight to the strawberries
1 lemon
Method:
Wash the strawberries and put them in a large pan (preferably stainless steel) with high sides.  Add the sugar and set the hob to medium-low heat.
Stir sugar and strawberries together well, adding a quartered lemon into the mix.  As the mixture heats mash it up with a potato masher and keep stirring.
Keep the jam cooking until it reaches setting point.  You can find this by using a jam thermometer which indicates where the setting point is.  If you don’t have a jam thermometer put a small plate into the freezer for a few minutes until it is very cold to the touch.  Then take out a small amount of jam and drop it onto the plate.  If it quickly forms a skin and sets firmly onto the plate then it has reached setting point.  If it doesn’t, cook it a while longer, put the plate back in the freezer for a few minutes and try again.
Once your jam has reached setting point, remove the lemons from the mixture and pour the jam into sterilised jars, making sure you fasten the lids on tightly.
Remember to be careful and to keep children away as it gets extremely hot and would be very painful if an accident occurred.
Enjoy your home-made jam!

Subscribe to Larger Family Life and get the latest news directly in your inbox or reader.  You can also join us on Facebook and Twitter too!

One thought on “Strawberry Jam Recipe”