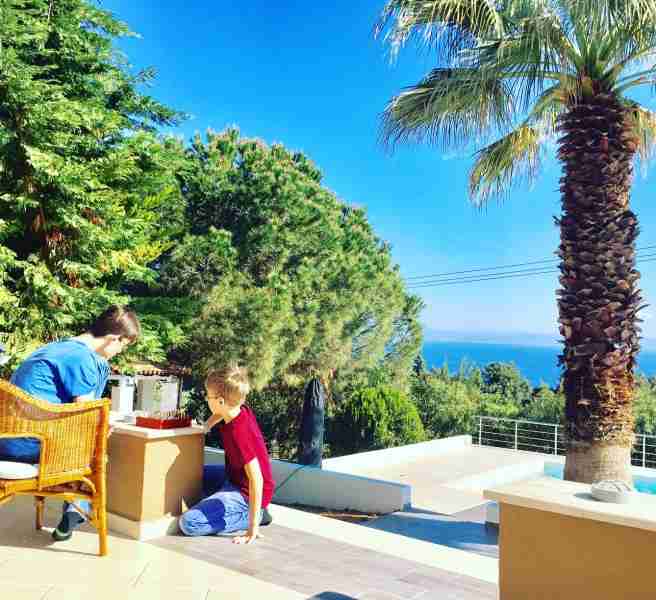 Travelling for weeks at a time with the children means that we need to prepare for the inevitable bad weather days, chilling out evenings and general ‘I’m bored’ moments. Rather than having the children take along the entire contents of everything they own, we pack up a box filled with toys and games that we can dive into during the times our sanity is taking a beating.

Being on the road with such a wide age range from 14 down to 3-years-old, we need to make sure that all ages and stages are accounted for without taking up a great amount of space in our minibus which is already packed with to the brim with the travel gear of a dozen people. We also need to account for the rainy days stuck indoors as well as a range of outdoor activities. In theory, we could pack up a trailer full of gear. In practice, a medium sized box is more than adequate if you pick the right stuff. Got a travel-loving child or two and need some gift ideas for your upcoming trips? Here are our recommendations:

A lovely little version of Classic Othello, the game of strategy has become more portable with Travel Othello from www.johnadams.co.uk. A welcome change to our beloved chess sets that come everywhere and need replacing often, his soon proved to be a firm favourite from the very youngest to the very oldest, and Mike and I spent many an evening pitting our wits against each other. This was our family’s ‘One more game’ game.

Being a travel game the pieces are much smaller than the original which we found can be a little fiddly in flipping and turning without moving the pieces next to them, especially for those with larger hands. Despite this, the game is great fun with simple rules. The pieces conveniently pack away beneath the board which folds into a small case, so it takes up minimal space and is light and small enough for you to stick in your bag and carry it around, so offering excellent portability and convenience.

Young travel-lovers will probably already be familiar with the BBC’s fabulous Go Jetters. Now their imagination can act out their own travel adventures with the Go Jetters character toys. From code-breaking Foz and his very own GO Giant suit with bolt launcher to Kyan (who quite fascinatingly stays upright in his GO Roll), it’s up to the Go Jetters to save the day against that naughty Glitch and Grimbler.

Whilst the little ones love the playsets simply because they are so much fun, I love how chunky and sturdy they are for small, not-very-dainty hands. If you’re looking for something a little more seasonal to go with it, how about discovering how the Go Jetters save Christmas in this exciting DVD? It’s nailbiting stuff – can they do it? Go Jetters are definitely a winner for our travel tots and they are available from all good toy shops including Amazon now.

In the meantime, settle your little Go Jetters in front of this brilliant Blue Planet mash-up…

Now it might be difficult to believe ahem but I remember the Original Rubik’s Cube when it first came out. Hands up who else unstuck the colours and restuck them in an effort to convince everyone that they had cracked it? Yes, I know it wasn’t just me. Of course, I haven’t told the kids that I did anything of the sort and Rubik’s have put paid to that kind of ingenuity since, so we can enjoy some relative peace and quiet as the kids try to complete the puzzle.

Rubik’s have continued to add to their collection of puzzles and they are all as addictive as the classic cube. Tim held onto his Rubik’s Junior pup everywhere we went. A puzzle specially designed for younger children that is available in a range of different animals, it has fewer mix-up possibilities making it simpler for young ones yet challenging enough to help them develop their logical and problem-solving skills. Or, if they are like Tim, just asking an older sibling to do it for them.

As well as the classic Rubik’s cube and Tim’s Rubik’s Junior, there is also the Rubik’s Cube 2×2 which has just four squares on each side. You might think it will make it simpler to solve. It isn’t. You can find more of the Rubik’s collection as well as a list of stockists at www.johnadams.co.uk.

What I love about both of these games is that there is little damage that can be done. Swingball has been a firm favourite for years, with its tethered ball and light rackets that are packed away in its own base making it portable and safe. The competitive side always comes out out everyone during a game of Swingball and it still withstands the blows and the test of time. We finally have to replace our last set but after four years and countless games, we can safely say that it has done a marvellous job in lasting for so long.

With so many children and quite a large area for them to play in, we decided to take along a couple of badminton sets too. I bought a couple of these cheap badminton sets which I didn’t expect to last very long but, at less than £10 for a net, four rackets, shuttlecocks and the poles, I wouldn’t be crying over a big loss if it didn’t. As it turned out the poles for the net did bend and break very quickly but as we could fasten the nets to a couple of trees this setback didn’t stop play. The rackets and shuttlecocks are still going so if you can work around losing the poles, it’s probably not a bad deal at all for the sake of having the rest of the set for little outlay. We also took along a couple of these volleyballs which took up very little space when deflated for travelling, yet remained quite light when inflated, so there was little risk of causing damage to plants or windows.

Ollie in particular is a huge geography fan. For Christmas he has asked for a metal noticeboard for his collection of magnets from each country he visits, a new map, a new blow-up globe, a new Smart Globe and money for the campervan that he is saving up for. If he could sit and read about different countries and plot routes all day long, he would. These books are perfect for kids like Ollie.

FlyingKids have created a collection of travel guides for children that are packed with fun facts and features on different countries or cities. Interesting, informative, colourful and fun, these are fabulous for encouraging learning about different countries and cultures in a clear and enjoyable way. Even I learnt some facts I didn’t know!

An absolute favourite for everyone, is there anyone in the whole world that doesn’t love Top Trumps? What I particularly love is, well, actually it’s not just the one thing. I love how they now cater for every interest, from nature lovers with their Bugs or Animal sets, to scientists, to sports fans to Disney fans to Superhero fans to… well, pretty much any interest now actually, but how they also cater to all ages too. We spent many evenings playing the portable and self-contained Top Trumps World of Animals Quiz, a twist on the original Top Trumps cards with 500 questions which taught us some interesting facts about animals we didn’t know.

The younger children who have yet to grasp reading can now join in the Top Trumps fun with the new game, MATCH! I loved this as it was such a winner with the little ones, keeping them occupied for longer than most other games. The rules are easy; just match five of the same characters in a row before your opponent does. It’s also a great game for taking travelling as it packs away in its own plastic case. Top Trumps MATCH! is available in a range of different character sets including Harry Potter, Marvel Avengers, Disney Princess, Star Wars and more. In fact, you can see the entire Top Trumps range over at distributor Winning Moves, where you are certain to find something for even the most difficult to buy for.

Okay, so this isn’t something you could strictly take travelling with you but I couldn’t write a post like this and not include it. This Smart Globe Discovery by Oregon Scientific is, as I mentioned previously in this post, on Ollie’s Christmas list once again. It isn’t cheap at around £50 but of all the educational globes on the market, this is the one I would recommend despite the expense. We bought one several years ago and it provided many hours of fun with its different settings and quizzes. It helped all the children with their geographical knowledge immensely and they had fun seeing who could find the most countries before the time ran out. The only problem was that it was loved so much that the wire connecting the Smart Pen eventually came loose. I contacted Oregon Scientific who very kindly replaced it without any quibble at all. Sadly, the replacement eventually succumbed to the same fate, leaving Ollie globeless and me debating whether to replace it once again. I have to say that it’s probably his favourite go-to gift of all time, so the likelihood is that I will purchase it once again. Not only is it something he loves but it’s definitely an investment in his education while he is having fun too, so I think worth the money.