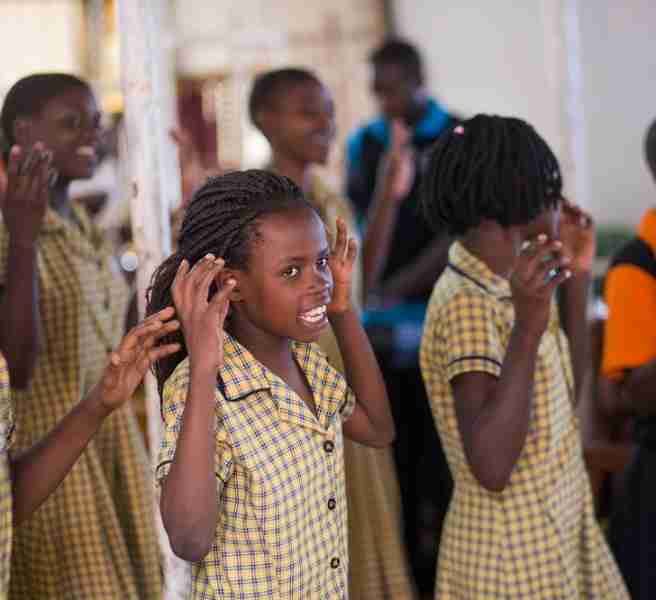 I sat in awe as dozens of boda-bodas passed our minibus on the Kampalan road, splitting around us unceasingly and continuing on their journey as smoothly as a river flowing downstream around a rock. This multitude of motorbikes passing by were given their nick-name from the days they were used to transport belongings from border to border. The image of three, four or even five people to a bike are not unusual to spot, as are the variety of goods that are carried along by their riders.

Our minibus continued to push its way through the chaos, a characteristic of the area not limited to the roads itself but to the sides also, as I delightedly watched another boda-boda pass us complete with rider balancing a double mattress on his head. ‘This could never happen in England,’ I thought to myself as I watched the crowds of people talking, walking, shopping or just sitting. Small shops flanked the sides of the roads, some with walls made of concrete, others created from wooden slats or shipping containers, almost all with corrugated iron roofs. They sat on the red earth selling anything from SIM cards to charcoal. Wall-less stores tightly filled the sides of the busy roads, any available space taken up with items of furniture with bedstead upon bedstead crammed together, or mounds of cabbages piled high creating a vegetable version of the Pyramids.

Kampala is Uganda’s only city and has a population of approximately one and a half million people. The chaotic bustle within it is broken with the lush grees trees and foliage, something I hadn’t expected to see. The beauty of Uganda hit me as soon as I stepped off the plane in Entebbe, with Lake Victoria encompassed by verdant fields and hills stretching out all around, towering palm trees standing majestically over the land. But even the overwhelming natural beauty of this stunning country cannot detract from the great need it has; the need to eradicate poverty once and for all.

Our visit to Uganda has been a long time coming. Almost two years of meetings, conversations and arrangements later and it was hard for us to believe that we had actually arrived. Two previous attempts to visit the country had been cancelled at the last minute due to the loss of both my father and 34-year-old brother last year, both to cancer. Finally, we were here, not only to meet the girl we had sponsored for almost ten years but also to see for ourselves how sponsorship through Compassion UK actually changes a child’s life. Compassion UK is just one of the global offices developed from the original charity Compassion International, created back in 1952 by Everett Swanson. You can find my brief introduction to Compassion here. Together, each of the country offices in 25 of the world’s poorest countries work together with the common aim of lifting children out of poverty.

But they can’t do it without the sponsors.

Cait and I wanted to find out the difficulties families face in circumstances far different to our own and to see how vital Compassion’s support – and ours as sponsors – is to breaking the cycle of poverty in Uganda.

Our first visit was to the Katuuso Child Development Centre which is located in the hillside community of Buziga, 10km south of Kampala. Relatively close to the city, the risks and dangers that children face here are different and often far greater than those faced by those living in the countryside. As one project leader stated, ‘It is better to be poor in rural areas than in the city.’ The children attending Katuuso are not faced with the same level of danger as the children within the city slums themselves where drugs, gangs, violence and abuse is higher due to the sheer increase of people and close proximity in which they live with each other. Not being within the city does not mean that the risks are no longer present, it simply means that they are a little further removed from them geographically. For children in Uganda living in poverty, those dangers and more are a constant threat, regardless of where they live. The only real way to keep these children safe is to provide them with a means to lift themselves out of poverty. You see, that is what Compassion is about.

It isn’t about creating a dependence upon sponsors or the charity. It is about enabling children to receive an education, not only in the usual lessons we perceive to be educational such as the maths or English we automatically think of. It is about teaching them how to treat one another through spiritual and moral guidance, how to look after themselves through good hygiene and nutrition, it’s about providing them opportunities to learn life skills such as cooking and cleaning, and it’s about giving them the opportunity to learn vocational skills such as sewing, jewellery making, tie-dying, sandal-making which will enable them to earn an income to lift themselves out of poverty. Poverty has a voice

Poverty speaks to a child.

Poverty tells them they are worthless.

Poverty tells them they do not matter.

Poverty tells them nobody cares about them or what happens to them or about what they do.

Poverty tells them they have no future.

Poverty is a thief

Poverty steals from a child.

It steals their future.

It steals their hope.

When a child in poverty loses all else they can still find a way to continue somehow.

When they lose hope, there is absolutely nothing else at all left. We can silence poverty

Thanks to those throughout the world that sponsor a child at Katuuso, the children here have a future, they have opportunities and they have hope.

Hope enables them to laugh in the face of poverty.

For the children of Katuuso, they don’t stop there.

They sing in the face of poverty!

Sponsoring a child gives them their future back.

It gives them back their dreams.

It gives them back their hope.

And it releases them from its clutches.

Thanks to Compassion, they have a reason to sing.

Make a difference like this to a child waiting to be sponsored. Click over to Compassion UK and sponsor a child. You won’t regret it!

Please feel free to feature or link back to this post so that we can help as many children as possible lift themselves out of poverty.