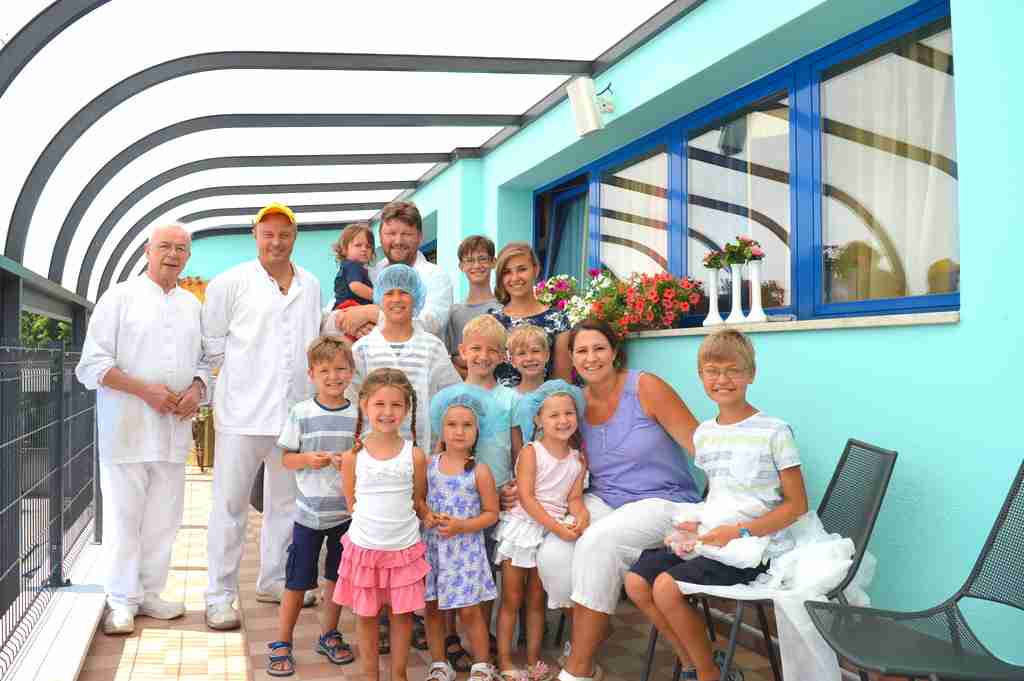 Our final visit during our food trip of Italy was to Vicenza, the home of Gastronomia Il Ceppo. The visit didn’t begin so well; we (read: Mike), entered the wrong address into the SatNav and we ended up in the wrong place. A frantic and apologetic email to Riccardo (second left in photo above) reassured us that we were only 15 minutes away from the Monticello factory we were due to visit.

The factory is only one part of the Il Ceppo story. The company was originally started back in 1971 by Osvaldo Boscolo (first left in photo above) when he opened up a shop in Corso Palladio, right in the heart of Vicenza. Following his initial aim to offer customers high-quality gastronomy, his vision developed further resulting in the creation of the factory in which they would create and distribute their own range of delicious gastronomic ready-meals.

Gastronomia Il Ceppo is another family business and Osvaldo’s four children, Riccardo, Maria Giovanna, Ivana and Maurizio all work within it. For us, the fact that family is so highly considered and that family businesses involve generation after generation is such a wonderful thing. We love the way that businesses are created yet the family remains at the heart of it. We hadn’t realised it before but this trip made us appreciate the difference between producers such as these compared to large-scale, impersonal production lines. The family connection, working together to make it successful, truly gives a company heart and soul.

And so the Boscolo family invited our big family behind the scenes to see exactly went into the production of their products – in particular the area’s reknowned stockfish dish Bacalà alla Vicentina.

Even though the business began with the shop’s launch in 1971 it wasn’t until 1986 that the factory began. Not only does Gastronomia Il Ceppo distribute its products throughout north Italy but also to Austria and Spain too.

Now, we never purchase ready meals – ever – so we were keen to see just how a ready-meal could claim to be so similar to a freshly made meal. Was this even possible?

It soon became apparent how this was possible. All the food was freshly prepared and much to our surprise, was done so mainly by hand.

While the factory did employ the use of some machines there were far fewer than we expected there to be. Those machines that were used were either to speed up the processes or for packaging the finished products.

We saw how industrial quantities of mayonnaise were made using fresh ingredients. The eggs went into the machine first. As you can see they are ready-cracked – can you imagine cracking that many eggs by hand?!

All the ingredients were precisely weighed and measured…

…and added to the machine.

Then it was time to add the olive oil.

We loved the olive oil on tap! This would be a fantastic addition to our kitchen!

This machine would produce huge quantities of mayonnaise in only three minutes. Impressive, huh? The downside is that this machine alone takes two hours to clean. Not so impressive.

Okay, so the mayonnaise is fresh. But what about the rest of the food?

We saw how the potatoes and vegetables were cooked…

And from watching the production of the mayonnaise…

…to seeing it mixed in with the freshly cooked vegetables…

We had expected the product to be rolled out on a conveyor belt and put together by machine. Instead each meal was efficiently and expertly created by hand.

The undoubtable freshness of the ingredients ensures the products not only look delicious but taste it too.

Obviously, we had to test them out for ourselves… just to check, of course!

The meals were then cooked in large ovens containing rack upon rack. I would love an oven like this. Life would be much easier especially when it comes to Sunday roasts!

Once cooked the meals are quickly frozen, the speed and temperature at which they are done so are perfectly calculated to ensure they retain maximum freshness without losing any of their taste.

We went through the kitchens passing by pack after pack of lasagne – my favourite! Once again the freshly made sauce was kept in huge containers before being fed through this machine which was perfectly timed to synchronise with the conveyor. Every step of the process is once again manually overseen.

The regional speciality of Bacalà alla Vicentina – otherwise known as stockfish Vicenza-style – is made with Norwegian cod, and it was time for us to find out exactly how it was made.

Riccardo began by showing us the difference between the cod before and after it had been prepared for cooking. Okay, so we’re novices, but none of us realised just how big cod actually were.

Riccardo then explained how it takes one person an average of ten minutes to remove the bones from each fish. This job is again done manually, by hand.

The cod is naturally dried, then soaked…

If you ever get a chance to try this dish you really ought to. It is truly delicious as we would find out for ourselves later that day.

Our tour of the factory was almost over but not before a little bit of manual labour. After all, with so many hands available to help, why not?!

The children loved the opportunity to get stuck in…

Ollie loved labelling the products so much that he plans to coming back to work here. How he will combine it with his plan of being a farmer in Germany, I’m not sure.

We almost had to drag them away in the end. I’m sure they would have stayed all day if they could have!

After tasty mid-morning refreshments on the gorgeous balcony…

…and a quick photo for posterity…

…it was time to say goodbye to the factory and hello to Vicenza and the very shop where the story began back in 1971.

Walking into the shop felt like stepping into a food-lover’s paradise. It was heaven!

Shelf after shelf of fine cheeses…

Everywhere was a culinary delight.

And so much of it!

But that isn’t all.

Walk down the stairs and the cellar has been transformed into an intimate, cosy restaurant.

More than 500 varieties of wine line the walls. I was really hoping nobody would accidentally knock a bottle off the shelf!

The food here was quite indescribable. It was delicious, it was gorgeous to look at, it was wonderfully served – it was quite simply amazing.

The children tucked into a dish of pasta with goose sauce without hesitation. Judging by all the clean plates it was a great hit. They have asked for it since which means that we’ll have to return to Vicenza!

Mike and I were first given a variety of bacala each cooked in a different way. We then enjoyed the Bacalà alla Vicentina and we were stunned by its flavour. It was superb! I would like to say that I stopped to take a photo but it looked too good to stop for (and I didn’t think of it until afterwards).

So here is one of us looking happily impressed instead:

I know. You’d have preferred to see beautiful food instead of not-so-beautiful us. Never mind, all that means is that you’ll have to take a trip to Vicenza and visit Gastronomia Il Ceppo for yourself!

Check them out on TripAdvisor where so many share our opinion, and we were thrilled to find out that they were also awarded two stars at the Bellavita Expo last week. We hope that their products will be available in the UK very soon as they really are unlike anything you would have tasted – we guarantee it! Mouthwateringly delicious doesn’t begin to describe them.

Our family would like to thank the Boscolo family and everyone at Gastronomia Il Ceppo for our wonderful visit. If you read this, we want you to know that you have taught us so much and given us very fond memories that we will cherish forever. Thank you for welcoming us so warmly.

If you haven’t done so already do watch the short video of our visit below. You can also visit their website here and keep in touch with them on Facebook here.

2 thoughts on “Behind the Scenes: Gastronomia Il Ceppo”