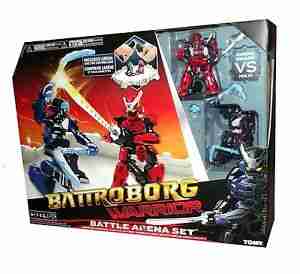 Most of us are familiar with Battroborg toys, even if we’ve not actively used any of them ourselves. Over the years, different sets have been on wishlists for Christmas and birthdays, and after trying out the Battroborg Warrior Battle Arena Set, we can see why.

The Battroborg Warrior Battle Arena Set includes the arena, two controllers, and two figures, which for us are Viking and Knight Chevalier.  It’s the perfect opportunity for the kids to fight without any injuries – mainly because they’re only controlling the fighters! Such a simple game can, quite amazingly, keep active kids enthralled for so long. It will start off with just the two children wanting to play, which then leads onto another one wanting to play the winner, with another after them, and so on. In this house, it’s never difficult finding a playmate, but rather, narrowing it down!

The figures are motion controlled, which is absolutely brilliant. Seeing the five inch figures copy your moves with a swipe of a nunchuck is interesting in itself, but to control them in a fight is even better. Whether you’re a child or adult, you won’t be able to let go of that competitive feeling!

The robots move freely, so don’t necessarily need the arena which is great if we’re going somewhere and forget the base. However when possible we do use the arena, as it stops the robots from falling off the surface when they’re being played with (perhaps slightly too) enthusiastically.

This Battroborg set, while it doesn’t necessarily keep the children quiet, does provide them with a lot of fun for a large portion of time. A wonderful indoor toy for when it’s too rainy or gloomy to play outside, or a great outside toy to play underneath the sun.

We love the Battroborg Warrior Battle Arena Set, and we’re sure that almost anyone who tries it will find it as entertaining and competitive as us.

You can buy your own Battroborg Warrior Battle Arena Set from Amazon here.