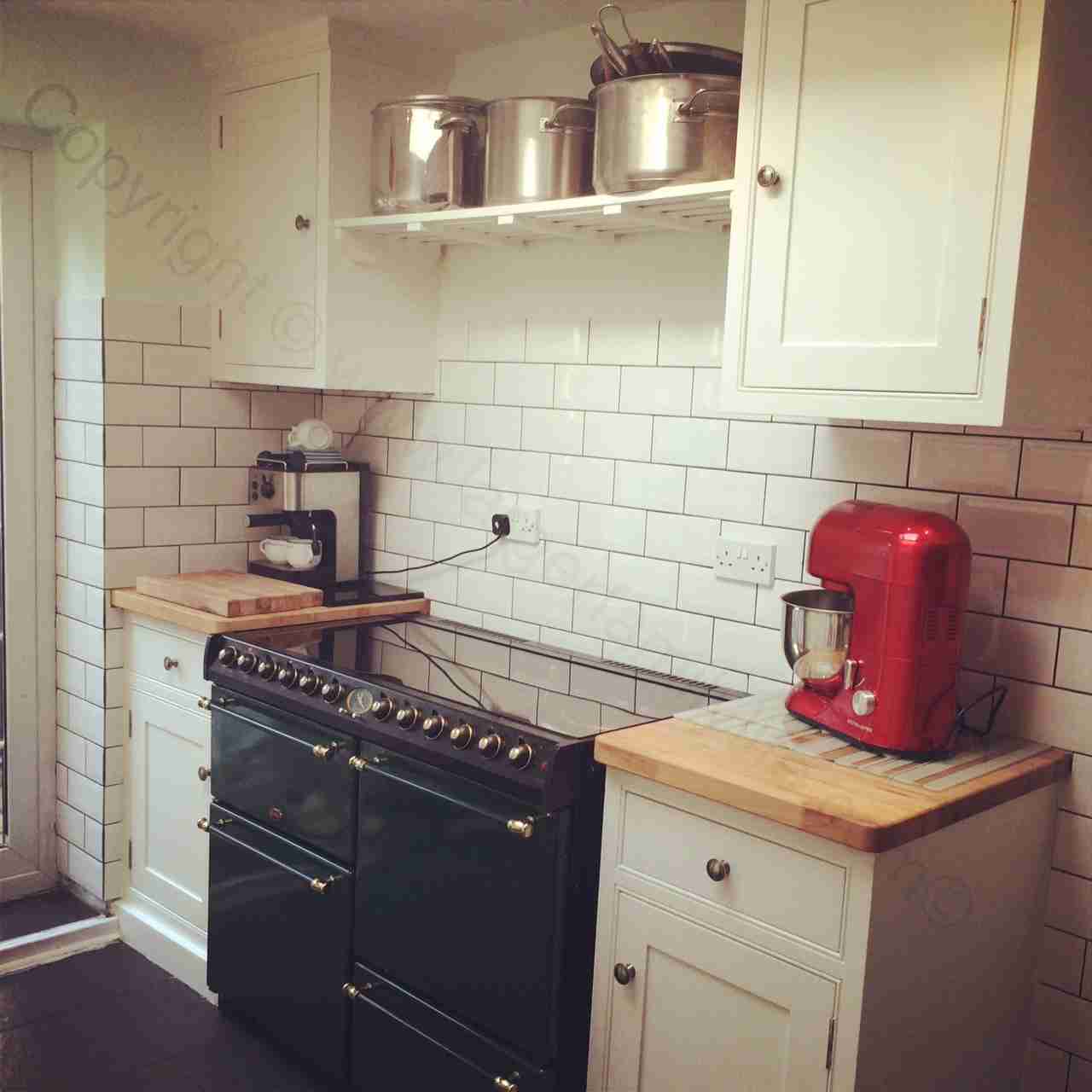 It took the best part of five months but our kitchen is finally finished, oh yes!

We had been living with half a kitchen for the last two years when our built-in oven broke. We knew we wanted a range cooker but couldn’t afford one, so I set about keeping my eye out on eBay. As luck would have it, there was a range cooker in full working order available. All we had to do was bid, win and arrange a courier.

We bid. We won. We booked the courier.

But we had nowhere to put it.

There was no alternative but to take out part of the kitchen in order to fit the new cooker.

So that’s what we did.

The state of the kitchen was only supposed to last until we had the money to carry out the work to the room. We didn’t bank on it taking another two years until we were able to begin.

I had drawn up the plans of what I wanted. Lots of cupboard space, a butler sink and shelves. The kitchen is actually a dining room too. It’s quite a large room but lacked cupboard and worktop space. Mike took my plans and turned them into reality. Every part of this kitchen was made to measure from my design and created from scratch by Mike.

We removed the fridge from one side of the dining area and moved it to the opposite side which freed up a lot of space. We then added two long units (the right-hand side houses the filing cabinet!), and I wanted some shelves there too.

The shelves are terrific for displaying items away from curious little fingers. The choice of worktops is far greater than I had ever realised, from silestone worktops to wood and everything else in between, it seems. We opted for a solid beech worktop in the end but if you prefer the marble style, The Marble Store is a good place to start.

I gave the table and chairs a makeover. The table and chairs were sanded down and given a coat of primer undercoat followed by a coat of Farrow and Ball’s Wimborne White (the same as the cabinets). Fabric seat covers which aren’t easily removed are not too convenient in a houseful of children, so the seats were re-covered with Laura Ashley oilcloth (bought in the sale, of course!). I didn’t bother giving the seats a distressed look , figuring the little ones would manage it fine by themselves. Within a week, the shabby chic look was created. An oilcloth tablecloth finished the look.

Black tiles on the floor  and a pale Nordic Green shade for the walls finished the room off.

Only one thing remains.

8 thoughts on “At last, our dream kitchen is finished!”