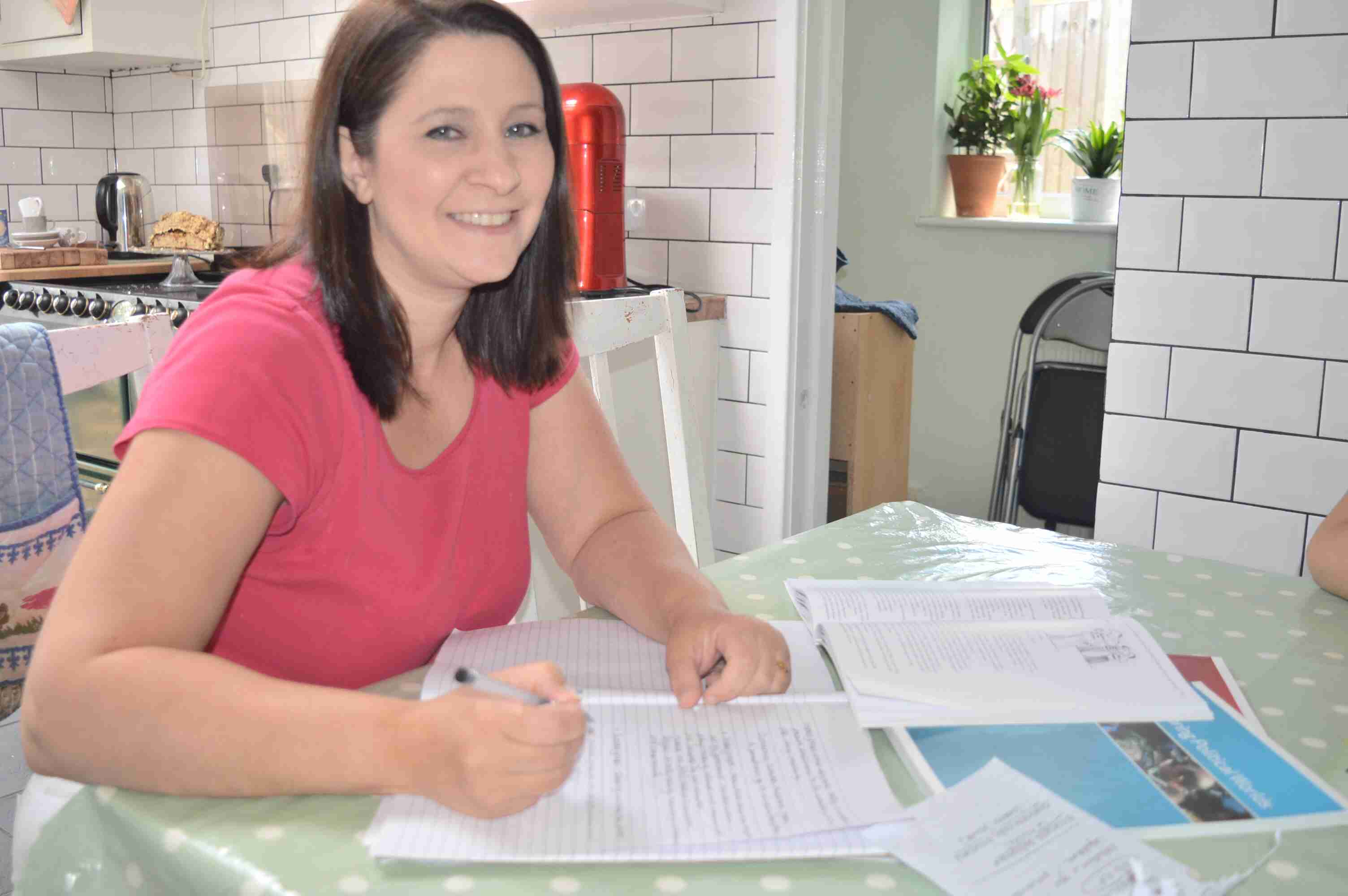 It was about a year ago that Mike and I stopped off for a rare coffee together while running errands, and it was during this quick rendezvous that I decided to run my thoughts by him. Ever my sounding board, his opinion is the only one which matters to me. He knows me inside-out; how I think, what I feel, how I behave (or misbehave) as I do at times.

‘I’m thinking about doing a degree,’ I told him.

Once I had shared the thoughts I had been mulling over for weeks, desperate for some clearer perspective than my own muddled, muddied musings, it felt like I was hearing myself for the first time.

I was approaching 39-years-old. I was pregnant with my 13th child and we were already busy enough with work and family and all the other stuff that comes with life in general. Returning to study at this age in those circumstances surely wouldn’t be wise, would it? But it was too late. I had already spoken out loud.

Then we talked and talked about why I should, the reasons I felt I shouldn’t and what on earth I could use as an excuse not to.

My plan was to apply to the Open University so that I could add studying to my already packed life. The course I wanted to do was a Bachelor of Arts in Politics, Philosophy and Economics. I imagine Mike was surprised, as was I in all fairness. Maths has always been my weakest subject to the point where numbers can leave me quite scared at times, so why on earth would I even consider economics? Philosophy is something that has never really held my interest and so I had to concede that actually, it wasn’t the course I wanted to do at all. The only interest of the three subjects was politics, and I would have far preferred to do the BA in Politics and History but to my disappointment this wasn’t on offer, leaving me no option.

So why did I want to return to studying as a working, home-educating mother-of-soon-to-be-13? Here are just a few of my reasons:

To see if I could

I wasn’t too bad of a student at school. Like my mother likes to say, I could have done well. Instead, I bummed out of college while studying law to have a baby instead. Not the best career choice perhaps, but not something I would regret because, looking back, although I did things back-to-front and the ‘wrong way around’, my life still managed to turn out pretty great and I’ve a bunch of fabulous (albeit noisy) kids thrown into the bargain. Okay, so it took some determination, a lot of work and a lot of rollercoaster rides but still.

So just out of curiosity, there has always been this nagging feeling of ‘what if’. What if I hadn’t bummed out of college? What if I had gone to university? What if I did do as my golden-haloed sibling did and went to uni instead of bumming out to be a gymslip teen mum, ironing other people’s clothes on bathtowels on the floor to bring in a little extra cash? The what if needed answering once and for all, and the only way to answer it was by doing it and seeing what the outcome would be.

To prove that I could

I think I’m probably right in saying that we’ve all had people in our lives who have doubted us and made no secret of it. While people might like to spend valuable time of their own lives doubting me and speculating on what I might/might not be able to do or achieve, I like to rise to the challenge and set about seeing what I am capable of doing. I do it for myself, because I do like a challenge but it also provides the added bonus of being able to give the figurative salute of sorts to the doubters along the way.

To see what the fuss is about

I was about to see my first child off to university themselves and wanted to be able to understand exactly what it entailed. What was the workload like? What would be expected of them? How are they taught and how do they learn? What’s it all about, really? How could I empathise and understand their own challenges if I had no experience of them myself?

To get over my fear of numbers

Seriously, I’m completely awful at maths. But I do know how to make a profit, how to budget and how to save money. I do understand issues such as GDP and I am interested in the mechanics of how things work in the world – or in other words, I’m nosy. Plus I really, really wanted to do the politics part of the degree and I couldn’t do that without the other two subjects. So I decided to take the bull by the horns and face my numerical fears once and for all. If I really can’t manage it at least I’ll know I tried, but if I do tackle this mental block that I have where numbers are concerned it will do absolute wonders for my confidence, putting a lifetime of feeling of failure behind me where this particular subject is concerned.

Since I was a small child I hated ever being bored. I always wanted something to do – anything! But I had to be occupied with an activity or a book or… well, anything at all. I’m still the same. While I might crave a few minutes of peace and quiet, that peace and quiet will still need to be accompanied with something to read or write, or an activity to keep busy with during it.

I like to learn new things. I wasn’t too thrilled about school, but since I was no longer in school I’ve discovered that I like to learn about things that I’m interested in. This is probably why I’m such an advocate of home education, because I know that forcing anyone to learn about stuff they little care about is not going to instil a love of learning in them. Give them the choice to pursue an interest and they’ll learn about it effortlessly, eagerly and with enthusiasm. I believe that knowledge does give you power, in that it gives you choices. Develop a skill and you can put that skill to work for you. Develop knowledge in a field, and you can use that knowledge to your advantage. I strongly believe that you can never have too many skills and you can never have too much knowledge. However, you have to love what you’re learning about – or at least have a certain level of interest in it, otherwise what’s the point – you’ll be smart and miserable. I also believe that if you don’t use it, you lose it, and I’m certainly not willing to put my little grey cells out to pasture just yet.

I have just completed my first year and am currently awaiting the results of my final assignment which I need to pass in order to continue (edit: I passed!). I have enjoyed it so far, although we haven’t yet got to the nitty gritty of the course that I’m keen to get on with.

Juggling is proving to be a skill I’m still honing, with some evenings leaving me worrying about whether I ought to prioritise study over work, or vice versa. The final decision on which is dealt with first is prioritised with each looming deadline.

I’ve been disappointed when grades have been returned slightly lower than I had expected them to be, and I’ve been elated when they’ve exceeded my expectations.

But most importantly, I’ve made the start. I made a decision and I ran with it – maybe not fully convinced that I could or should – but I did.

They say the first step is the hardest. I took the first step, and that’s all I needed to do. As the quote goes, I don’t need to see the whole staircase, I just need to take one step at a time.