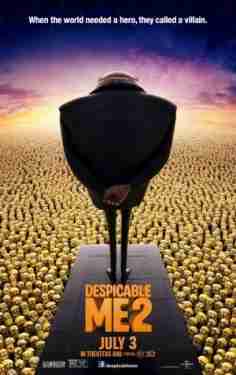 We’ve all heard of the adorable little yellow Minions that shot to fame in the 2010 film Despicable Me. They returned a few months ago in the sequel, Despicable Me 2, and once again stole the show.

Of course, it wasn’t only the Minions that had our hearts. Evil-villain-turned-good-guy Gru (voiced by Steve Carell) and his three daughters Margo, Edith and Agnes, who all appeared in the animated original did too. Joining them was a new character Lucy Wilde, voiced by Kristen Wiig.

An evil villain has stolen not only a bottle of highly dangerous liquid which could turn even the most innocent of creatures into the most aggressive monsters you’d ever have seen, but the entire lab that it was held in. The Anti-Villain League hires Gru to unearth him, knowing that as he was once a villain himself, he’d know how the rogue would be thinking.

Gru and his partner Lucy (of whom he tells his daughter Agnes that their relationship is strictly professional when she expresses her desire for Lucy to become her mother), must remain undercover, pretending to be nothing but owners of the bakery ‘Make My Day’. He begins to suspect the friendly owner of a new Mexican restaurant, Eduardo Perez, as he says that he bears an uncanny resemblance to the most infamous villain, El Macho. However, his suspicions are dismissed by the AVL because El Macho was thought to have been dead several years ago. Still, he holds onto his gut feeling even though no one seems to believe him.

Despicable Me 2 is not only a comical mystery all the family enjoys, but also has a romantic side. The film was watched from beginning to end by all of us, who enjoyed it incredibly. It is a well-played sequel to the original, which isn’t a common thing.

You can buy or rent Despicable Me 2 in digital form over on Blinkbox, or alternatively buy a DVD or Blu-ray copy on Amazon.

One thought on “Review: Despicable Me 2”