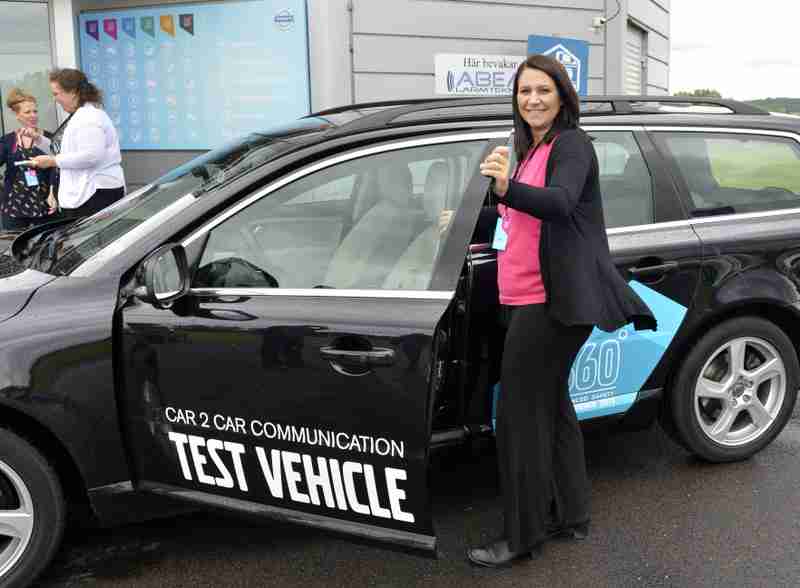 This was my moment.

After Volvo’s successful efforts in making me feel like the world’s worst parent, it was time for payback.

Volvo have a vision you see, that by the year 2020 nobody will be killed or seriously injured in one of their vehicles.  Not content with being leaders in safety following their brake-support technology introduced in 2006, their 2010 development of Pedestrian Detection with auto-brake and then their Pedestrian and Cyclist Detection in 2013, they continue to move the vehicular safety bar increasingly higher.  The first generation XC90 introduced new technology which would prevent vehicle rollovers.  The new model, due to be released at the end of 2014, claimed to knock spots off the all-singing, all-dancing original.

My plan for revenge was simple.

I would get into their new XC90 prototype and crash it.

Volvo have never been considered the ‘cool kids on the block’ when it comes to the car market.  They never seemed to have the aesthetic beauty of sportier little numbers.  They didn’t boast of hitting super-speeds in minimum time.  They were the kind of car the Amish would drive if horses and buggies were no longer an option.

But when I am driving around the most precious cargo I have – my children – and we happened to be involved in an accident, what will matter to me is not the ornamental beauty of the possibly now-crumpled exterior, or of the astonishing, eye-popping speeds it was once able to achieve, but whether or not we will come out of it alive.

Volvo claim that the new XC90 will go a long way to reducing injury or death on the roads thanks to a number of features it incorporates, and we were invited to try them out for ourselves. This was my chance to prove that they weren’t actually that safe and, in my quest to prove Volvo wrong, I was willing to quite literally put my life in their hands.

We headed off to Stora Holm – a test track where newly-qualified drivers can safely practice their skills in the riskier, more dangerous driving conditions.  This risk course is mandatory for all new drivers, enabling them to get to grips with skid pan and manoevre driving on the specially designed track.

We kicked off the afternoon’s events with a meeting where the safety features we would be trying out were explained in more detail. Here is a bite-sized version just for you:

But no matter what we were told, I remained sceptical and, at the risk of being seen as the disruptive kid in class, I had to throw out the obvious.

‘This all sounds great and wonderful and all but the bottom line is that technology fails,’ I began.  ‘By introducing a car which steers itself, aren’t we risking people becoming lazier drivers and relying on technology too much?’

Volvo were keen to point out that the whole idea of assisted steering is to work with the driver and not for them.  It will assist them and cut in if and when it senses that the driver has overlooked a potential hazard or, such as in the case of an animal running out into the road on a dark, dimly lit road,  is incapable of knowing one is near.  It is not, they impressed, to be viewed as a replacement for a driver, but an aid to work with them.

I wasn’t going to let this one go.  ‘But,’ I continued in my quest to prove them wrong.  ‘But what about newer generations of drivers to come?  I mean, yes I agree that our natural instinct if we see someone step out in front of us is to stamp on the brake but can you really reassure me that the boy racer of the future, who has really known nothing else, won’t sit with his friends and say, “Hey, check this out!” and take his hands of the wheel and feet off the pedals?  Isn’t it going to encourage some drivers to be irresponsible and then what happens if the technology fails?’

The smugness didn’t last long.  Volvo were ahead of me.  And ahead of you.  In fact, as it was explained the car markets are actually working almost two decades ahead of where we are now.  Rest assured that these questions have been considered and addressed. Technology is backed up with more technology and then some.

It was time to put the features to the test:

Pedestrian Detection in Darkness  – taking pedestrian detection a step beyond that of the current dawn to dusk technology, the Pedestrian Detection in Darkness with Auto-Brake feature will dramatically reduce the current 58% of night-time accidents in Sweden alone.  We headed to a dark, unlit underground tunnel.  On entering the tunnel we dropped off the photographer.  Lights on the vehicle were off and visibility was poor, to say the least.  Volvo guy turned to me and instructed me to keep on driving, even once I could make out someone ahead of me.  Do not stop.

‘Er, you want me to keep going?  We just dropped the photographer off somewhere.  It’s dark.  You’re telling me something will appear in front of me and I have to keep driving?’

‘Yes.  Just take your feet off the pedals.’

‘Uh – I don’t know how I feel about that,’ I nervously stated.

I drove and sure enough, a figure appeared in front of me.  Just as I was told to do, I took my feet off the pedals.  The car stopped.  All by itself!

‘Can I have another go?’

That sentence would be repeated several times that afternoon.

Adaptive Cruise Control with Steer Assist – allows the vehicle to automatically follow the flow of the traffic ahead, reducing accidents caused by inattentiveness and driver distraction.  ‘What if the car in front veers off into a ditch?’  I asked.  ‘Lane detection – your car will know not to follow,’ they reassured me.

Animal Detection – We’re not talking about the cute little squirrels skipping merrily out into the path of your oncoming wheels, but of the animals of mass destruction.  40% of accidents in Canada are reported to have occurred as a result of collision with animals.  In Sweden, the home of Volvo, there were 49,000 reported accidents in 2012 alone, 6000 of which involved moose.  The Animal Detection feature would act as an extra pair of eyes, detecting any potential hazards – even fast-moving ones with antlers – and will take over the driving of the car accordingly, slowing it down in order to prevent any collisions occuring.

Volvo informed us that:

According to the National Highway Traffic Safety Administration (NHTSA) in the United States,
10 per cent of all traffic fatalities at intersections are the result of red light violations. The Insurance Institute for Highway Safety (IIHS) reports that half of the people killed in red-light violation crashes are not the signal violators. They are drivers and pedestrians hit by the vehicle that drove through the red light.’

By signing up to the Car 2 Car Communication Consortium Volvo have entered into an agreement to use standardised technology for all cars, regardless of make or model, who have signed up.  This inter-car communication between vehicles, plus communication ability between road signs and traffic lights, will allow technology to foresee dangers that they human eye cannot.  Cars will be able to detect abject driving conditions and to warn the driver about them accordingly.  They will also be able to transmit these warnings to other vehicles.

Vehicles will also be informed if a car ahead of them has dramatically slowed down – even if the situation has arisen a fair distance ahead – enabling the vehicle to decrease speed at a slower rate and so avoiding emergency braking pile-ups.  Car 2 Car Communication will also inform vehicles of any emergency vehicles approaching, road works or traffic jams.  It foresees all the potential dangers, hazards and inconveniences in the distance that the driver doesn’t yet know about – a vehicular crystal ball, if you like.

I had read about this online the week before heading off to Volvo HQ, and was quite excited about seeing it for real.  There is something quite Knight Rider-ish about watching a car with no driver head off and search for a parking space – and we all stood there in a childish awe as we saw the seemingly impossible in front of our very eyes.

As fascinating as it was to watch, I feel that this might take a little more time, money and effort for Volvo to implement.  Car parks would need to get on board with the idea in order to create the required drop-off zones.  They’ll need to provide Volvo with their mapping and layouts, and they’ll need to consider how ticketing will work.  This could be costly, and the cost would need to be weighed up against whether this is just a gimmick or a potential valuable time-saving advantage.

Despite my reservations though, this was absolutely awesome to see.

Back in 2003, shortly after having Harry, sleep-deprived from a three-month-old baby and after working a night on-call, I was driving to the local farm shop when I lost control of my car whilst driving on an A-road.  The car shot from kerb to central reservation over and over, before I finally regained control and managed to bring it to a stop.  The experience terrified me, and the thought of what might have been was horrifying.   So when Volvo invited me to drive as fast as I wanted around the track and to aim to hit the central reservation barrier, the memories came flooding back.

‘How many of the public have tried this?

So, somewhat tentatively at first, I drove around the track and towards the barrier.  Sure enough, the car was deflected as if it had met an invisible forcefield.

The second time around required a greater speed, just to make sure.  Again, the car was pushed away – without touching the barrier at all – and positioned back into the lane just where it ought to have been.

This was definitely my favourite feature.  Having come so close to experiencing the devastating consequence of hitting a barrier at speed, it was this feature that I could actually appreciate first-hand.  This will save lives, I agreed.

So, despite trying as hard as I could, I could not crash a Volvo.  I couldn’t crash it into anything.  I couldn’t hit a person.  I couldn’t swerve it off a slippery, wet road.  Even my questions, which I thought were quite solid and reasonable, were all answered with expertise, knowledge and reassurance.

These guys know what they’re talking about.

And so as I headed on the plane home, I found myself thinking a sentence I never thought I’d think.