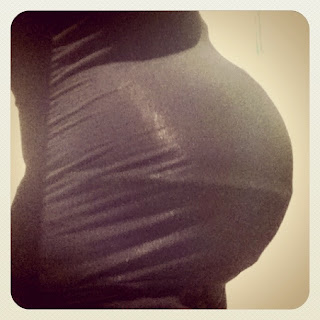 I am feeling a mixture of emotions this week.  On the one hand, I can’t believe how quickly this pregnancy has flown by.  It seems such a short time ago since discovering I was pregnant again, and then of course we embarked once again on the rollercoaster of hope and then despair when I began bleeding early on during the pregnancy, thinking that we were miscarrying again.  It seems like only yesterday that I went along to the Early Pregnancy Clinic, bracing myself to be told we had lost our baby, only to return home with the news that we were expecting two!

But while I can’t help feeling that this pregnancy has gone fast, I am also beginning to feel quite ready for the end of it.  The physical discomfort is making the simplest of tasks difficult.  Even picking things up from the floor requires the maximum of effort.  Sitting, standing, lying… no position is comfortable.  By the end of the day the heaviness in my legs feels tremendous.

Night times brings its own set of frustrations.  My legs and hips often go numb if I stay lying in one position for too long.  Carpal tunnel symptoms have begun in my hands and I have sat bolt upright in bed on more than one occasion with heartburn, reaching desperately for the Rennie.

As the weeks go by the Braxon Hicks contractions are increasing in intensity and frequency.  I experience the same during singleton pregnancies for weeks on end, so I don’t automatically consider it a sign that my body is limbering up for labour already.  I am not a woman who tends to labour early in pregnancy and even though I am expecting twins, I still believe I will go to at least 37 or 38 weeks and while I know that it is better for the babies to go as long as I can, I also can’t help thinking, “How can I go on like this?  I am so big already.  Can I possibly grow any more?!” but then again, what do I know?!  After all, whatever will be will be!

A combination of all the above plus by depleted iron stores means that tiredness is becoming more and more of an issue.  I am thankful that I do not need to worry about school runs and can remain at home for much of the time, allowing me to take things easy and at a pace I am comfortable with.  Catnaps are becoming a necessity during the day.  A five minute snooze on the sofa can make a lot of difference in getting through the day.

The babies are very active with Twin 1 taking the lead in the fidgety stakes.  Twin 2 is definitely a lot more mellow and less active.  The little tsunami waves across my belly remain mainly on the left side of my body, while more subtle movements and shapes tend to occur on the right.  I do wonder though, if it’s just the case of how they are positioned.

According to the app on my phone each baby now measures over 41cm long and weighs approximately 1.5kg.  They are now beginning to plump up, laying down their fat stores in preparation for birth.  Not only do they seem to be laying the fat stores down in their own bodies, they seem to be doing a pretty good job of laying them down all over mine too!

I just took and uploaded the photo at the beginning of this post.  Comparing it to last week it looks like a ginormous growth spurt has occurred.  What do you think?