I found out I was pregnant only two days after my father-in-law’s funeral. I don’t know why I tested. I wasn’t even late. But I did. And it was positive.

From the moment I find out I am pregnant I begin to worry. I never worry about having another child. That in itself is a blessing. But I worry dreadfully about losing another child. That is a hard thing to go through no matter how many times you experience it. When you’ve had the misfortune of experiencing it eight times it doesn’t give you much reassurance.

The first few weeks went ok. I did the usual rushing to the bathroom thing with every twinge “just to check”. I was tired which was reassuring and toward the sixth week I began to feel nauseous. All good signs.

We packed up for our holiday in Disneyland Paris. We set out early on the Monday morning. I’d just hit six weeks of pregnancy. That’s the time the baby’s heart begins to beat. Most of my losses were between the 5 and 6 week marks. I was beginning to feel a little more positive. Nausea, tiredness and hitting the six week mark. All great milestones. Until the following morning when I woke up bleeding.

I couldn’t believe it. Not only was I probably going to experience my ninth miscarriage, I was going to do so while on holiday. Rest was out of the question. You don’t go to a place like Disneyland on a trip you never thought you’d be able to take such a large family on, only to spend the week lying in the cabin. The children didn’t even know I was pregnant and they were looking forward to so much. I had to carry on. So we did what we went to do and waited to see what would happen. There wasn’t anything else we could do.

I must have visited every public toilet in Disneyland. (They were very clean and well looked after, just for the record). I was puzzled to find the bleeding petering out before it had even properly begun. No doubt, I thought to myself, by the end of a day’s walking about it will have got going.

The next morning it started again, just slightly. And again it stopped throughout the day, making a spot known here and there but nothing major. Again for the third day where I woke up with the greatest loss so far. That was the day my heart sunk. I thought it was all over. There was no way everything would be ok now. By the afternoon it had stopped completely and I had nothing at all for the whole of Friday. Saturday was going well too, until the evening when more spotting began.

We got home on Saturday evening but I couldn’t telephone the surgery until Monday. First thing on Monday morning I was on the ‘phone requesting a referral to the EPAC (Early Pregnancy Assessment Clinic) for a scan to see what was going on. I explained my history and the receptionist told me I would probably have to make an appointment to see the GP first. I didn’t need an appointment, I told her. I just needed a referral. The GP could do nothing for me and it would be a waste of my time and hers. They called me back four times requesting me to attend an appointment. Four times I refused. Eventually, almost two hours later, I was given an appointment at the EPAC. They couldn’t see me until the Friday. The spotting continued intermittently for the rest of the week.

Eventually Friday came around and I was suddenly very nervous. Mike took the day off work to sit with the children and I went to the hospital. As I sat in the waiting room I said several prayers, as I’d done so many times before in the same place. The prayers are always the same.

“Please let our baby be ok and if it’s not, give us the strength to deal with it.”

The sonographer called me in after what seemed like an age. We’d met before. Sometimes she had given me good news and sometimes she didn’t. She remembered me. We went over the routine questions and then she told me that I knew what to do so let’s just get started.
I lay on the bed and braced myself. Transvaginal scans aren’t fun at the best of times. I clenched my fists and looked at the ceiling, still praying my prayer. I looked at her looking at the screen.

I clamped my hand over my mouth in shock and she looked at me wide eyed. This was surprising to both of us, it seemed!

It was April 1st.

“This isn’t an April Fool’s joke?” I asked her.

“I knew you’d say that as soon as I saw them!” she laughed and she turned the screen to face me.

Clear as day, there they were. Two perfect little babies, each in their own sac, with strong little heartbeats flashing on the screen.

To say I was shocked is an understatement.

She checked and could see no bleeding. I was 7 weeks and 6 days according to my dates. One baby measured the exact dates and the other just a day behind. Everything looked good.

I was still in shock. 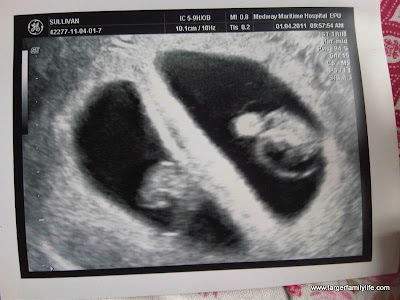 Our Twins at 7 weeks 6 days

You can read Part 2 by clicking here.