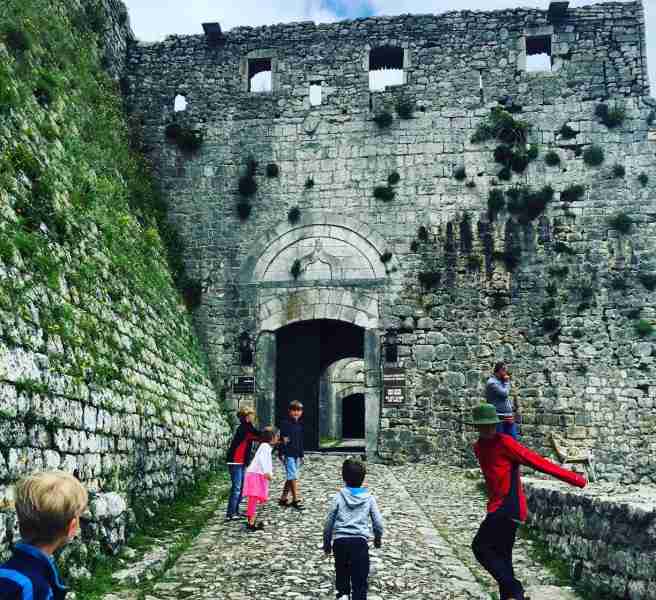 One of the places we stayed in during our recent trip through the Balkans was the town of Shkodër in the northwest region of the country, close to the border of Montenegro. This area was very unlike the southern part of the country from which we had just come. The beauty of the open and mountainous countryside was replaced with a large, bustling town and overlooking it, sit the magnificent ruins of Rozafa Castle. Finding the castle took a little time. We could see it but we couldn’t work out quite how to get there. Signs were few and far between and, where the road divided, seemed to be completely missing. Eventually we made our way along the long, narrow road that led the way up and along to a small set of free parking spaces, perhaps only large enough for four or five vehicles, which lay just beneath the feet of Rozafa. A short walk up along the path made for spectacular viewing over miles. The Bojana and Drin rivers could be seen as could Lake Shkodra itself. A board hung at the entrance showed the entrance fees of 200 lek (approximately £1.30 each), although the chap only charged the 12 of us 1000 lek in total to gain entry. Excavations at Rozafa Castle (Kalaja e Rozafës/Kalaja e Rozafatit) have resulted in discoveries from the Bronze Age up to the present day. The thick stone walls are 880 metres long over an area of nine hectares with most of the remaining walls thought have been built by the Venetians. There is also evidence of Ottoman (16th and 17th Centuries) and 18th and 19th Bushatlli traces within it. In 1479 Rozafa Castle became occupied by the Ottomans and the 13th century St Steven chapel was turned into a mosque. The castle is divided into three areas, one of which houses the museum which requires a separate entrance fee. Artefacts, models and information provided an insight into the castle’s history yet, fascinating it was, nothing stuck in my mind quite like the folk story behind the castle itself. The Legend of Rozafa tells the story of three young men, brothers of the House of Mrnjavčević, who were given the task of building a castle. By day they worked hard to build the castle walls yet each night, when they left, the walls would fall down. Day after day they built the walls. Night after night the walls would fall. One day, as they were working on the same walls once again, a wise old man approached them.

‘Day after day we work on this castle,’ they told the old man. ‘Yet every night the walls tumble down. We will never complete the castle. What must we do?’

‘I know what you must do but I cannot tell you,’ said the wise old man.

But the brothers pleaded.

‘Do you have wives at home?’ the old man asked.

‘Why yes, we do!’ the brothers answered.

‘The castle will only remain standing if one of your wives is sacrificed within its walls. Do not warn your wives, but  whoever comes to bring tomorrow’s lunch will need to be sacrificed. You must build the stone walls with her within them. Only that shall prevent it from falling.’

The brothers all promised that none would tell their wives of the terrible fate that would occur to them the following day should she be the one to take their lunch over to them.

The oldest brother did not keep his promise and quietly told his wife of the fate that would befall her.

‘Keep away,’ he warned her.

The second brother did not keep his promise and warned his wife also.

Only the youngest brother kept his word.

The following day, the mother of the brothers called the wife of the oldest son over and asked her to take over bread and wine for them.

So the mother called the wife of the second son.

The mother then called over the wife of the third son, who went by the name Rozafa.

‘Rozafa, please take over bread and wine for your husband and his brothers.’

‘But mother, I do not wish to leave my baby son. He needs me.’

‘We shall take care of him,’ said the oldest wife.

So Rozafa picked up the bread and wine and made her way to the site. As she approached the brothers looked up sadly and they explained what now must happen. The Poem of Rozafa

This post was featured in the Monday Escapes and Cultured Kids linkys.

24 thoughts on “Albania: The Woman in the Wall – The Legend of Rozafa Castle”