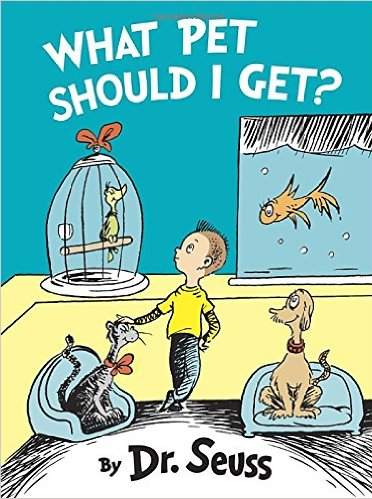 Show us a person who doesn’t love Dr. Seuss and we’ll tell you they’re lying. He is one of the most beloved children’s book authors, so much so that even adults find it hard to resist his work. From Green Eggs and Ham to How the Grinch Stole Christmas, his stories never fail to bring a smile to our faces.

The lesser known book What Pet Should I Get? has recently been released as a special gift edition. It tells the story of the two children from One Fish Two Fish Red Fish Blue Fish who decide to get a pet but face the important question of which pet to get. This story is told in Dr. Seuss’ signature rhyming style which draws in children of all ages.

The finished story What Pet Should I Get? was only discovered by Dr. Seuss’ wife after his death in 1991 and rediscovered in 2013. It was then published in the summer of 2015 and became an instant hit and when you read it it becomes obvious why. It’s not just the writing that makes Dr. Seuss books such a hit, but his illustrations which are all included in the book. When it was discovered it was found as a spread with illustrations and text taped into the correct position!

We read What Pet Should I Get? out load to all of the younger kids and it managed to not only keep their interest, but had them asking for it to be read over and over again. They’re fans of Dr. Seuss books (a look at one of our many bookcases and it becomes obvious) and even 23-month-old Tim sat down quietly to soak up the pictures. It was quite clear to us that they loved the story and everything about it, although it did begin a heated discussion between the girls as to what pet we should get.

As well as the story, the book also features several pages talking about the discovery of What Pet Should I Get? and Dr. Seuss himself.

Head over to the HarperCollins website to purchase your copy of What Pet Should I Get? (RRP: 12.99).  Alternately you can buy a copy from Amazon here. Keep an eye out for Horton and the Kwuggerbug (a collection of four short Dr. Seuss stories published in magazines during the 1950s) being released in March 2016!