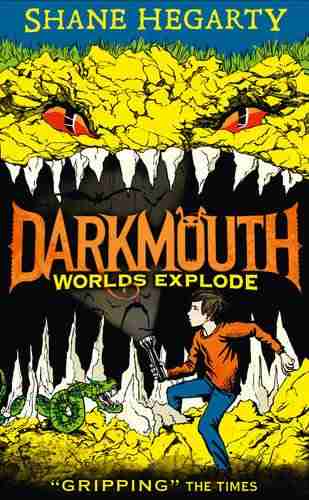 Darkmouth is a hugely popular fantasy series for kids aged between 8 and 12 and we can see why. Written by Shane Hegarty, it’s a gripping page-turner that you won’t be able to put down. It’s got adventure, drama and dry wit in all of the right places, and a good plotline to boot. When the first one became so loved, HarperCollins quickly picked it up and have recently released Worlds Explode which is the sequel to The Legends Begin.

Darkmouth is the only town still attacked by monsters and the only Legend Hunter able to defeat them, Hugo the Great, has been captured. This means it’s all on Hugo’s son Finn’s shoulders. Finn is unsure if he’ll be able to win the fight between good and evil and rescue his father, but what choice does he have?

We often feel that many sequels are never as good as the original, whether it’s books or movies. Worlds Explode is an exception to this rule as it was as good as, if not better than, its predecessor The Legends Begin. You immediately became sucked into the story, and it didn’t take a long time for something interesting to happen, unlike some other fantasy novels. There’s just enough action and a touch of mystery, and it kept us reading until the very end. When we began reading it became so engaged in the storyline that it was finished within a couple of hours!

The story was well developed and it didn’t drag on or move too fast as some books do. It also paves the way for any future releases which we are definitely looking forward to reading when they are released!

There are some brilliant illustrations throughout the book which really add to the story, but not too many distracts the reader from the story itself.

If you have a reluctant reader and want to find something to encourage them that they will love we think the Darkmouth series is a great place to begin. We’d recommend it for anyone over the age of 8.

You can buy Worlds Explode by Shane Hegarty from Amazon here.