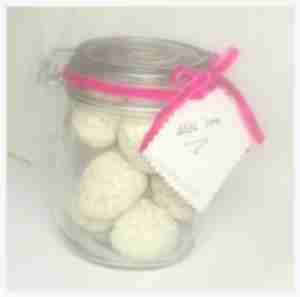 Looking for an inexpensive homemade gift idea that you can make in minutes? How about these Oatmeal Soap Balls? They’re natural, contain skin-friendly ingredients which don’t cost the earth to buy.

The ones in the photograph were actually made by our creative entrepreneur, 8-year-old Eddie – who then promptly asked how much he’d be able to sell them for – so it’s something that older children can make (under supervision) and give with pride.

Grate the soap into a heatproof bowl, then melt it over a bain marie.

As it melts add in the olive oil, goats milk and honey. Keep stirring as the soap melts.

When the soap has melted well and all ingredients are now a creamy consistency remove from heat and allow to cool slightly for two to three minutes.

Stir in the oatmeal well. The mixture should be quite thick.

Leave for another two or three minutes until the mixture is cool enough to handle but not so cool that it sets.

Mould into eight or nine balls and rest on greaseproof paper to harden.

Once balls have set place them in a decorative jar with a ribbon or raffia ready for giving.

One thought on “Oatmeal, Honey and Goats Milk Soap Balls”