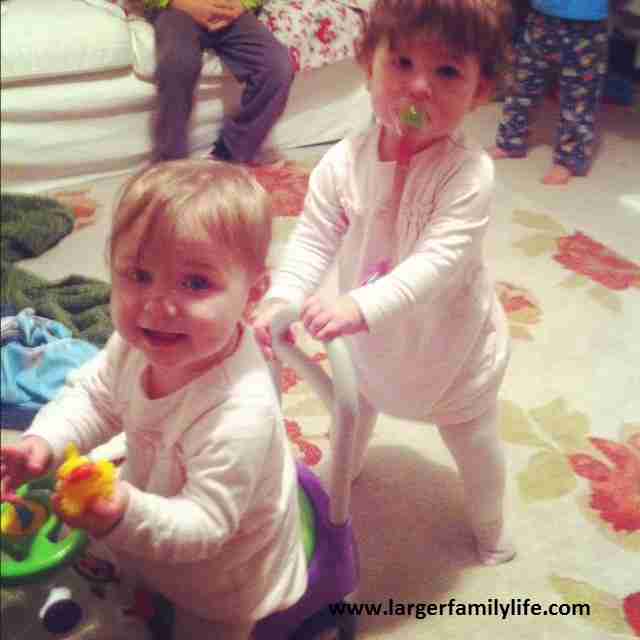 Libby and Anna are now the grand old age of 14 months.  Well, 14 months and two days to be precise.

When they were born Libby weighed in a whole 10 ounces more than Anna.  Looking back at the photos Anna looked comparatively skeletal to Libby, with Libby affectionately described as being the ‘heftier’ of the two according to my consultant – as hefty as a 5lb 10oz baby can be, I guess!

As they make the transition from babyhood to toddlerhood I sit in awe and wonder at their progress.  It is always magical to see your child grow and change and learn new things before your eyes but with twins it’s different.  You get the bonus of watching two siblings the same age learn to interact and discover the world together.

In the last two weeks their interaction with each other has grown greatly.  Where when they were younger babies they were somewhat oblivious to one another, they now seem to have realised that there is someone else who ‘gets it’ the way they do.  And more to the point, if they join forces together they can fight against those of us that don’t ‘get it’ the same way.

They have started to babble together – to each other.  Libby, born a minute before Anna, has maintained the position of the caring older sister.  We have noticed that she likes to share things with Anna, breaking off a piece of her bread or taking her dummy out of her own mouth to shove into Anna’s, albeit for mere seconds.

Anna is more of a prima donna it seems.  She loves her food.  Loves it.  And she loves everyone elses food.  For one so diddy it has become apparent that she can hold a lot of food within her tiny body.  She makes her displeasure known if her food runs out or if someone else has something she wants.  Or if lunch isn’t prepared quickly enough.

Libby is a chatterer.  Libby has been trying to get the hang of walking, moving herself through the kitchen whilst holding onto the backs of the dining chairs, with wobbly legs and voicing a’Whoa! Oo-ooh! rather like the Scarecrow from the Wizard of Oz. Libby loves cuddling dolls and poking them in the eye.

Anna is a noisy chatterer with a husky little voice.  She has a tiny but fierce temper but loves the camera, posing on cue as soon as she detects that she may be caught on film.  When they were younger babies Libby got the hang of moving about and crawling first.  This meant that if Anna was lying on the floor or in their shared cot, Libby would often move over to her, either squishing her or taking her bottle from her.  Anna is now getting her own back.

Both know several words in sign language and Libby says a few words herself too.  Despite Anna looking the daintier, more delicate of the two it is clear that she isn’t.  She can hold her own, and has earned herself the nickname ‘Shrek’ thanks to hear forceful, windy performances.

Libby is rather more ladylike, at times becoming quite coy and shy.

Both are becoming climbers.  The stairs have been climbed up and tumbled down several times – the gate having broken thanks to over-eager young boys crashing their way through.  The makeshift blockade that Mike set up lasted for no longer than two minutes when, once Libby realised she alone couldn’t move it, waited for Anna to come along.  Libby pushed against the right side of the box and Anna on the left and together they moved it out of way.  When they worked it out once they teamed up without hesitation over and over and over again.

Watching them work things out and interact is wonderful.   I’m finding it quite amazing at how, despite a seeming lack of communication, there are no barriers to what they can understand from each other.

I have to admit though that I do wonder how this will grow as their communication does.  I’ve a feeling we may be seeing a little mischief from these two, don’t you?