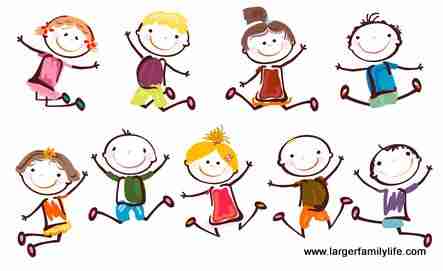 This post was originally written over a year ago but I think now is a good time to re-post it so here it is:
Earlier this week the website Ready for Ten began a series called “I don’t know how she does it”.  The first interview was with a mum of five.
While most of the comments were supportive, kind and relevant to the feature there were a couple of comments which questioned the large family impact on the environment and calls for reasonable limits to the number of children that people have.  I felt it was nothing to do with the interview itself and could have been debated elsewhere, feeling saddened that such comments were made on what should have been a fun interview giving an insight in another mum’s life.
Then, knowing that I have also been interviewed for the series (due to be posted next week some time), I anticipated receiving a similar reaction myself as I have been more than doubly “reckless” with my reproductive organs.  So I decided that now would be a good time to run this post.
The overpopulation debate has been running for at least a couple of hundred years now.  Back in 1798 Thomas Malthus calculated that the world’s food would run out by 1890 in his “Essay on the Principle of Population”.  This didn’t happen and so it was almost a century later that Paul Ehrlich made his claim in 1968 that human reproduction would overwhelm the earth and one fifth of the world’s population would consequently die through famine by the end of the 1970’s.  This didn’t happen either.
Now, to say there are too many people for the world is not true.  The world is big enough for us all and it is big enough to provide
for us all over and over and over again.
According to the U.N Population Division the world population in 2009 was 6,829,360,000.  The landmass of Texas is approximately 267,000 square miles (7,443,532,799,900 sq ft).  This means that if we divide the landmass of Texas by 2009’s population each person would have an area of 1089.93 sq ft – or to put it another way, a room measuring 33 x 33 ft approximately.
We can even go one further.  The landmass of Wales is 8022 square miles (223,640,524,800 sq ft) and if we did the above calculation based on this each person in the world could fit in the country of Wales in a 32.74 sq ft area (or a room measuring 5.72 x 5.72 ft).
So you see, there is plenty of room for all of us and then some.
Now to tackle the resources.  There are plenty of resources in the world to keep us going.  Forests regrow, the water will always be there unless the water cycle comes to an end, there are renewable energy sources available to us and there is plenty of room to grow as much food as we could ever possibly need for the entire world.

Another frequently overlooked point regarding resources is that they are constantly changing.  For example, oil was never a resource until the industrial revolution came along.  Until then all it did was make water undrinkable and unusable.  Once machines had been invented then it had a purpose – in fact such a purpose that wars were (and are) fought over it – wars which create far more of an impact on the world than a handful of larger than average families.  Science changes, resources change.  Within the next hundred years we may be able to heat and light our homes by using sewage.  That’s a never ending resource and who is to say with certainty that it won’t happen?!

4 thoughts on “Large families and the overpopulation debate”