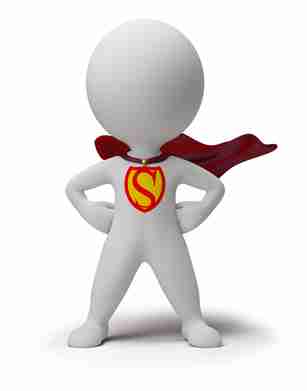 When people hear how many children I have they (understandably) look surprised.  They often then follow with the words, “You must be Supermum!”

No, I definitely am not.

Please don’t assume I have that accolade because I don’t and I am nowhere near receiving it.

This morning is yet another which saw my day begin at 4am.  Anna decided to wake for a feed at just before 4.  This followed her waking up at just after midnight.  Her 4am wake up resulted in her still being awake at 4.30am, by which time I’d given up all hope of getting back to sleep as I needed to be up at 5am anyway.  I barely stopped myself from sobbing as I trudged downstairs with her, resigning myself to a day of extra tiredness and grouchiness.  Sesame Street’s Oscar would pass for Truly Scrumptious in comparison.  I’m tired.  I’m really, really tired and I already feel miserable with it.  SuperMum wouldn’t feel like that.

Oh yes, my early morning starts.  That’s something else that impresses.  People comment how they couldn’t do it.  They could if they trained themselves.  You, reading this, shaking your head – yes you.  You could too.  What do you mean you’d hate it?  I hate it too.  Really.  I do.  I mean, it’s useful and I can get a lot done and you do train yourself over time so that it becomes less painful but I don’t really like it.  I don’t mind it because I’m used to it now.  I suppose I like it in a way because I know how beneficial it is but would I rather sleep?  Yes.

If I don’t get up before the kids and have at least one sip of coffee I’m crabby and short-tempered.  I have a list of things that need to be done and having a bunch of kids demanding breakfast (how dare they?) and getting in the way of me unloading the dishwasher and putting another set of clothes into the washing machine and cleaning the toilet and doing all the other stuff I would much rather be doing* really gets my goat.  I need to be up before them for their sakes.  I should be dancing and singing around the kitchen Mary Poppins-like every morning after skipping merrily down the stairs hand in hand with them because that’s what SuperMum would do but I don’t.  Trust me, the 5am starts are a must-do.  I could never afford the therapy they’d all need otherwise.

If the old wive’s tale (is it?) of letting a baby cry so they can have strong lungs is true, then my lungs must be superbly reinforced because I do like to have a shout.  Well, I don’t actually enjoy it but it’s like a cannon for releasing stress.  SuperMum wouldn’t do that.  I do.

I am not even going to pretend that I’m patient.  I am not.  If I want something done I want it done now.  Not in a minute and not later.  I hate waiting for things.  Pregnancy, for example, is far too long.  Nine months, I ask you?  Some days, counting down to bedtime (for the children, not for me) seems to take forever.  And all I want to do is to have a little bit of peace with a mug of hot chocolate.  It’s hardly rock’n’roll.

Even while I’m typing this I’m thinking of all the things I do that I shouldn’t.  Should I even be typing them here for publication on the www, I wonder?  I mean, it’s tough enough admitting your failings but to have them out there on t’internet for all and sundry to see is just asking for trouble, isn’t it?

It’s as if some people think I’m short-tempered, impatient, crabby and grouchy because I have “all those kids.”

Let’s get one thing straight here – I was a misery long before my children came along.  They are not my excuse that I am the way I am.  I am the way I am because I am how I am.  Yes, that sentence doesn’t make sense to me either.  I don’t care.  I’m tired.

I’m very suspicious of people who act like the sun shines in their world every day.  Don’t they ever have to hide from the rain cloud that threatens to pour by the bucketload over their head?  The ones that claim the accolade of SuperMum for themselves… really?  You really have the answers?  You must be rich.  If you aren’t rich then you ought to be.

That’s why I’m suspicious of parenting “experts”.  I’d love to ask them if they never made a mistake.  I want to know if they really believe a majority of the stuff they say because although some of it sounds good, and it might be a nice thought, I can’t help but feel sceptical. Mostly, I’d love to talk to the grown up children of these parenting “experts” and ask them if their parents never made a mistake when raising them, seeing as they’re making their money out of people by claiming to know all the answers now.  I’d much rather hunt out the old lady in the post office who managed to raise her now grown and responsible children through harder times and seek her advice than someone who claims to have the A-Z of parenting knowledge because they did a degree or two and have letters after their names.

I don’t have all the answers.  I wish I did but I don’t.  I don’t even have half the answers.  There isn’t a day goes by when I don’t do a handful of things that I regret doing or saying by the end of it.  I’m hardly likely to advise someone else when I struggle with whether what I’m doing is wrong or right half the time.  At least by keeping my parenting to myself I’m only risking putting my own children in therapy.  I am not willing to give advice that may be crap and then I have to be responsible for your kid’s therapy too.  If I mention something here that you think is a good idea on your own head be it!

Looking at that list of failings it’s quite apparent that I am not mum material at all.  I should never had any children, going by that, let alone eleven of the poor souls.  It wasn’t always like this.  I was once the best mum in the world.  Then I had children and became a real mum.

In this day and age of the gloating Facebook status and bragging Tweets and endless awards for best blogging/working/entrepreneurial/stayathome/workathome/abseiling/bungee-jumping/deep sea diving mum left, right and centre, admitting that mum-life isn’t a walk in the park isn’t the easiest thing to do.  I’ve admitted it to myself, to you and to the other  readers out there.

So no, I am not SuperMum.  Some days I am BarelyAdequateMum.  Only we’re not allowed to admit it.

I am not SuperMum.  I am RealLifeEveryDayMum.  Some days are quite good.  Others suck eggs.  That’s just life.

And, if we’re honest I’m probably much like many of you.